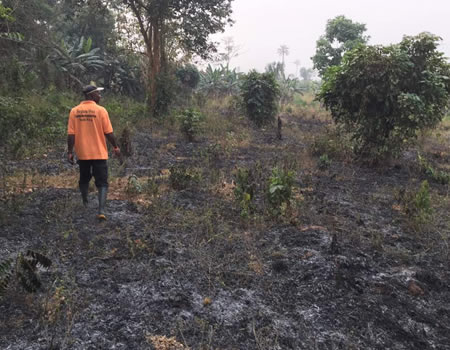 Some of the farmers, who spoke to our correspondent said they have lost millions of naira due to the destruction of economic crops, occasioned by the incessant invasion of their farmlands by nomadic herders.

They subsequently called on the state government under the leadership of Governor Rauf Aregbesola that leased the farmlands to them at Esa Oke Farm Settlement to come to their rescue in checkmating the destruction of their crops, which they claimed serves as their sources of livelihood.

One of the farmers affected in Esa Oke farm settlement, Mr Sola Obembe said “on the 26th of January, our farms were set ablaze by herdsmen and over 100 acres of farmland was damaged with an economic value of hundreds of millions.

“It is not only me that was affected, there are several farms located in Esa Oke Farm Settlement. My allotment there is five acres.

“This is a threat to Yoruba economy and enough is enough” saying there was a critical need for the government and relevant security agencies to explore pro-active measures in putting an end to the worrisome activities Fulani herdsmen.

According to him, “Also in Ikoyi town, we had a trial farm of tomato and cucumber of about 200 plants which was also set ablaze. The fire started around 5.30 pm and spread quickly as we have plastic mulch and drop lines all over. Fortunately, some of our farms’ workers who live close were still around and they tackled the blaze”,

“Our issue now is clearing, and fixing our irrigation infrastructure. On another note, we know they harvest our cucumbers to feed their cattle, but that is a different story,” Obembe lamented.

Another farmer in Esa Oke Farm settlement, identified as Mrs Jeje told our correspondent that her allotted farmland of about five acres, where she planted plantain and cassava was destroyed by Fulani herdsmen last week.

She alleged that the herders grazed their cattle on the farm and harvested some ripe cassava tubers and bunch of plantain to feed their cows, saying she had lost millions of naira to the development.

When contacted over the incident, Osun State Commissioner for Special Duties, who also doubles as the chairman of Peaceful Co-Existence of Fulani Bororo and Farmers in the state, Mr Oguntola Mudsiru Toogun confirmed the development but said about 29 farmers affected by destruction farmland at Esa Oke had been paid compensation by Fulani herders.

He said the government was taking proactive measure to foster peace and harmony among Fulani herdsmen and farmers in the state, assuring that efforts were ongoing to sustain peace and avert any clash between farmers and herders.