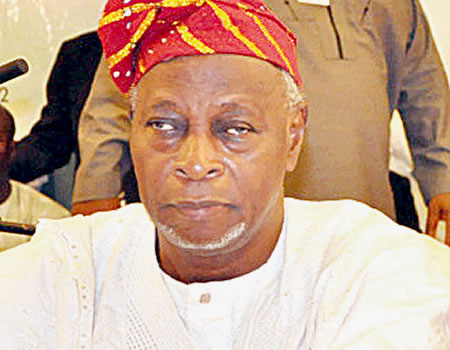 FORMER Secretary to the Government of the Federation, Chief Olu Falae, has written to the commandant of Amotekun corps in Ondo State, Mr Adetunji Adeleye, alleging that herdsmen had been destroying his farm.

In the letter, Chief Falae appealed to the Amotekun commandant “to save my farm and workers from further attacks.”

Part of the letter reads: “In the last few weeks herdsmen came into my maize farm twice to eat up and trample large sessions of the farm. I reported the incidents to Alhaji Bello, the chairman of Miyetti Allah in Ondo State, but nothing has happened. In the last few days, they have gone to at- tack my citrus farm by stealing harvested oranges and destroying what they could not carry away.

“The police on security duty on the farm were sent to drive them away, but they have been com- ing back every night to attack my workers in our camp, breaking their doors

and carting away all their belongings. Please, let Amotekun save us and our livelihood. They kidnapped me on September 21, 2015; they should not be allowed to do it again. Thank you for rendering our race this patriotic duty.”

The Personal Assistant to Chief Falae, Captain Mos- hood Raji (retd) had earlier given the details about how herdsmen recently attacked the farm.

Captain Raji (retd) alleged that the herdsmen, who had camped their cows in the farm in Ilado village in Akure North Local Government Area of Ondo State, destroyed the maize farm before moving to the citrus farm, which they set on fire.

He said that in addition to destroying the farm, the herdsmen also invaded the farm house in the middle of the night and attacked the workers who had reported the incident to the police.

The attack was said to be their reaction to the warning given by the police, who warned them against further destruction of the farm.

He said: “After the herdsmen attacked Chief Falae’s farm and destroyed maize

worth millions of naira, they moved to the citrus farm and after harvesting the oranges, they set it on fire. We have reported the incident to the police and the hoodlums, who seem irked by the development, returned to the farm house and attacked the workers on the farm.”

He stated further that the herdsman had relocated their cows, numbering over 1,000 to the farm, adding that they move about both at night and day time, destroying farm produce.

Nigerian Tribune gathered that Falae, who was abducted in September 2015 by some herdsmen, had invited policemen to the farm following its incessant invasion and destruction by the herdsmen and their cattle.

This action, according to Raji, did not stop the herdsmen, numbering about 10, as they continued to move around the farm unhindered, insisting that they would not leave the farm because that’s where their cows graze.

When contacted, the state’s Police Public Relations Officer (PPRO), Mr Tee-Leo Ikoro, said he was not aware of the incident.