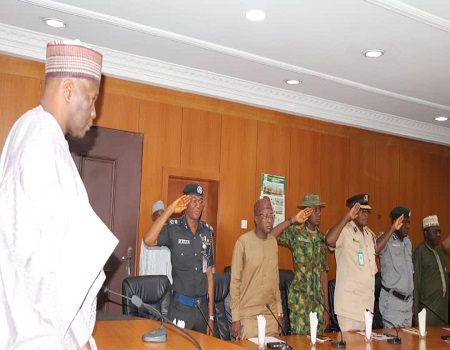 In a move to avert violence clash, Gombe state Governor, Alhaji Muhammadu Inuwa Yahaya has convened an emergency State Security Council meeting in order to tackle the reported cases of herders-farmers conflicts in some parts of the state.

While briefing newsmen after the meeting, which was held behind closed doors, the State Commissioner of Police, Bello Makwashi said that the council discussed the current security threat, concerning the herders-farmers conflict in some local government areas bordering the neighbouring states.

He further said that they have agreed to adopt measures to combat the threat and nip it in the bud without being confrontational.

The Police Commissioner said: “It is not going to be confrontational, we are adopting community-based strategies. All stakeholders, including the Ministry of Internal Security, the Police and other security agencies, leaders of the  Fulani, farmers and the traditional rulers will come together and chart the best way to tackle the issue instead of confrontation.”

He also said that there was no loss of life as a result of the conflict which he said was caused by the migrating herders passing through the state, adding that they are taking measures to manage the situation and ensure that the herdsmen pass without causing damages to farmers’ crops.

On the upcoming Yuletide, Bello Makwashi said that they have made preparations well ahead of time to ensure a peaceful and hitch-free celebration in the ’ember’ month across the state.

The meeting which was presided over by the Governor was attended by the State Commissioner of Police, Commander, 301 Artillery Brigade, Director State Security Service, State Controllers of the Nigeria Custom, Immigration and Correctional Services as well as Commandants, Nigeria Security and Civil Defence and Federal Road Safety Corps’.

Also in attendance were the Deputy  Governor, Secretary to the State Government, Chief of Staff, Attorney-General, Commissioner of Internal Security and Ethical Orientation as well as Special Adviser on Security Matters as contained in a statement by Ismaila Uba Misilli, Senior Special Assistant, Media and Publicity to the Governor.