Help me so I can pay my medical bills, Kogi poly graduate pleads with NHRC SARS panel 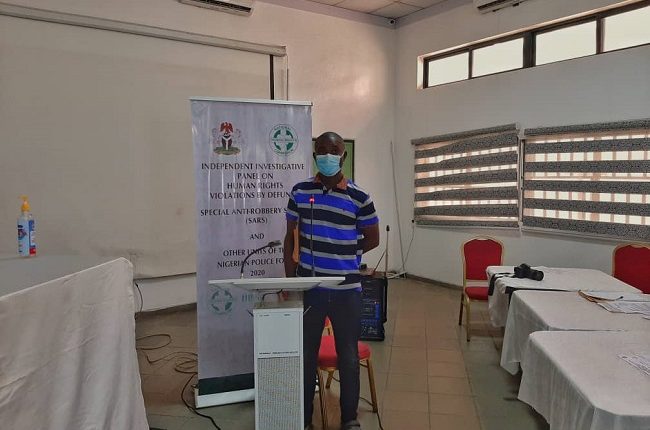 Share
A Public Administration graduate from the Kogi State Polytechnic, Lokoja, Linus Godwin, on Tuesday pleaded with National Human Rights Commission (NHRC)’s independent investigative panel on rights violations by the defunct SARS to help him so that he could clear his medical bills and also do tendon transfer surgery on the leg he was shot by policemen while still in school.
Godwin made the plea when he appeared before the panel, which he had petitioned, alleging torture, cruel, inhuman and degrading treatment against OC of the defunct SARS Lokoja, Kogi State Commissioner of Police and the Inspector-General of Police.
According to him, on November 28,  2018, when he was in his final year, he was in the school waiting for a project supervisor at the Computer Department when there was a peaceful protest that led to the death of a student called Kabir.
The petitioner said as a result of the protest, the police drove into the institution’s premises and shooting, leading to people running for dear lives.
“Police drove into the school and started shooting. I ran from where I was sitting to the other side and got shot.
“I was taken to the police clinic by SARS officers where I was partially treated by the police doctor. He said the wound is beyond their control,” Godwin told the panel.
He further said he was later taken to the Federal Medical Centre (FMC), Lokoja, where he was further treated partially, adding that doctors there asked him to run some tests before they could carry out another treatment but their machine was not working.
Godwin told the panel the state Commissioner for Youths and Sports visited him at the FMC, adding that the commissioner directed that he (petitioner) be transferred to the Kogi State Specialist’s Hospital.
He said that after taken to the specialist’s hospital, the commissioner never came to see him there, adding that if he called him (commissioner), he always told him that he was at meetings.
He added that the police did not do anything for him at the hospital despite several calls he made.
“I was taken there (specialist’s hospital). They opened a file for me and was treated but since that day that the commissioner left,  he was nowhere to be found.
“Whenever I called him,  he would say he was in a meeting. There was nothing from the police either. I  called and did everything, nothing came from the police.
“My card was blocked; no treatment. All my drugs and other medical prescriptions were not attended to. Since then, it has been difficult for me,” Godwin told the panel.
He added that he was partially discharged from the hospital again and he started physiotherapy and advised to go somewhere in Kaduna or Kano, yet there was no improvement in his condition.
The petitioner said at the last place, he was asked to go for tendon transfer surgery, saying that he was unable to do it due to the lack of money.
Asked what he wanted the panel to do for him, he said, “I want this honourable panel to help me so that I can clear the medical bills and also do tendon transfer surgery and possibly compensation for me.”
While being cross-examined by CSP James Idachaba, counsel for the police, Godwin informed that a Deputy Commissioner of Police in the state sent N5,000 to him through a student, Agada Inuwa, who was a member of the National Association of Nigerian Students (NANS).
The chairman of the 11-man panel Justice Suleiman Galadima (retd), after listening to Godwin’s testimony adjourned the hearing of the petition till April 29 for defence.

Taming inflation or sustaining growth: Why CBN held rate at 11.5%