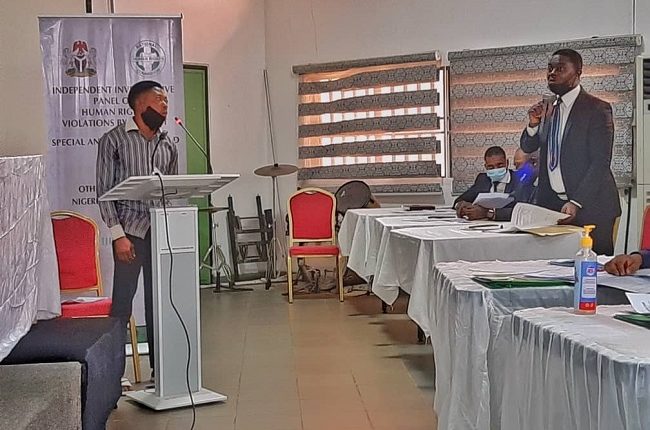 A former security guard who worked at the Bayelsa House in Abuja, Francis Ogbaji, on Friday pleaded with the independent investigative panel on human rights violations by the defunct SARS and other police units set up by the National Human Rights Commission (NHRC) to help him enforce his fundamental rights.

Ogbaji told the panel that his plea was a result of his alleged unlawful detention and torture by some police operatives.

According to him, his ordeal in the hands of the police started on April 11, 2020, when he and three other colleagues of his were invited to the Central Police Station, Federal Secretariat, Abuja, following a report of the theft of a television set, banner, refrigerator and some documents from one of the offices in the building they were guarding.

Ogbaji informed the panel that on arrival at the station, they were detained by the DPO as suspects for the missing items.

“My family members applied for my bail and the DPO set the bail conditions, which they eventually met on the 13th April 2020.

“Surprisingly, the DPO without giving any reason transferred our case file to the State Criminal Investigation Department (SCID) of the FCT Police Command, Garki Abuja,” he told the panel.

According to him, he was subsequently detained at the SARS facility at Abattoir on the order of ACP Mantu of SCID FCT.

He informed that he secured the services a lawyer, Nnaemeka Duhu, of Jimmy and Jimmy Associates to secure his release on bail on April 28, 2020, adding that despite meeting the bail conditions set by SCID, he was still not released.

He said in view of this, Duhu had to approach the authorities and was told they would have to wait for the nominal complainant before he could be released on bail, which he said his lawyer contested.

Ogbaji told the panel that he was detained without proper feeding and was tortured by police personnel with his head down and two legs up.

He added in the course of being handcuffed, he sustained some injury on his wrist, adding that he was asked to confess to stealing the items or face death.

He told the panel that he refused to confess to what he did not do as directed by the police.

Ogbaji further told the panel that apart from suffering untold hardship as a result of his arrest, he also lost his job, adding that he was unsuccessful in all interviews he attended after the incident.

He, therefore, prayed the panel to compel the police to write an apology letter to him to prove his innocence of the offence he was accused of to his intending employers.

While testifying for his brother, an elder brother to Ogbaji, Ebu Peter Ogar, corroborated the complainant’s testimony, adding that he told the police that his brother had lived with him for four years and never stole a pin.

Meanwhile, after the complainant and his witness’s testimony, counsel for the police, Fidelis Ogbobe, sought an adjournment for the respondents to open their defence, adding that he needed to make enquiries on the names the complainant mentioned.

Ogbobe’s plea followed the directive of the panel’s acting chairman, Garba Tetengi SAN, who stood in for the chairman, Justice Suleiman Galadima (retd), ordering the respondents’ counsel to bring the IPO of the case using the case file.

He then adjourned the matter to March March for the continuation of hearing.

The British Parliament at the Westminster Hall held a debate on ‘e-petition 554150, relating to Nigeria and the sanctions regime’ on Monday. The government of the United Kingdom has however responded…Help me enforce  Help me enforce

The surprise visit made on Friday night by the leaders of the ruling All Progressives Congress (APC) to former President Goodluck Jonathan at his residence in Abuja triggered a stir in the major political camps, resulting in at least four possible theories..Help me enforce  Help me enforce

One killed, shops razed as Yoruba, Hausa clash in Ibadan