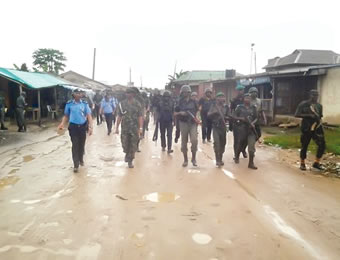 The scenario playing out in five communities in Ogun State in the last few weeks could best be described as a war situation.

The situation is better imagined than experienced as there is no life in areas under the siege of militants who have attacked and killed scores, both young and old.

The peace once enjoyed in those communities has eluded the residents, as many have fled from their homes for safety, while those still around live in fear.

Business activities have been shut down completely as schools, market places, religious and medical centres are now under lock and key, pending when normalcy will return to the communities.

Worried by this unwholesome development, the state government, on Monday paid an on-the-spot assessment to the troubled communities, to ascertain the level of damage and to assure residents of their safety.

The delegation was led by the deputy governor, Mrs. Yetunde Onanuga; the Secretary to the State Government, Mr. Taiwo Adeoluwa; service chiefs including the Deputy Commissioner of Police (Operations), Bello Makwashi; the state Director of the Security Service, Kabiru Sanni and the Brigade Commander, 35 Artillery Brigade, Alamala, Muhammed Danwalis.

The first port of call was Imushin, which houses no fewer than 27 villages under it, with the whole community looking like a ghost town. Everywhere was extremely quiet and calm. There was presence of police in strategic points.

The team was conducted round the town by the Divisional Police Officer in charge of Ogijo, Mohammed Tijani, who explained that the genesis of the crisis was as a result of the killings of two people suspected to be vandals at Topkatts Hotel by the men of the Special Anti-Robbery Squad (SARS), following a tip-off.

At Imuti, officers of SARS were fully on the ground to forestall any breakdown of law and order while few residents around were peeping through the windows, begging government to fortify security measures in their locality.

Also, armoured personnel carriers were positioned at Igbo-Olomu, Ebute-Ibafo road, while the deputy governor who expressed shock at the development passionately appealed to residents to return to their homes and resume their normal daily living.

Addressing the visitation team, the Olu of Imushin, Oba Taiwo Bamgbose, said government needed to redouble its effort and called for more reinforcement of security personnel to confront the militants.

Earlier the same day, traditional rulers and village heads from the troubled communities had in a “Save-Our-Soul” meeting with the SSG which had in attendance all security service chiefs and other stakeholders held in Abeokuta, said that the crisis had cost them fortune.

Speaking at the meeting, Alhaji Azeez Ariyo, a landlord at Imagbon, explained that all villages under Imushin, about 27 in all, had been under attack of the militants.

He said the militants who had been attacking them were armed with sophisticated weapons, adding that about nine landlords had fallen victims at the hands of the hoodlums.

He said: “The issue started ?started on Friday night. A lot of people were killed. They confronted people that were returning from work. We have seen hell since this started.”

Ariyo narrated how the criminals invaded Imagbon community while landlords in the area were keeping vigil to ensure their safety in the hands of miscreants said to be in the habit of looting business places when others have gone to sleep.

He said that the militants, on the said day unleashed terror on the landlords and killed nine of them, while a man from the northern part of the country said to be breaking fast was shot in the stomach several times.

Also speaking, the Baale of Ebute-Ibafo, Chief Folorunso Balogun, said only military presence could checkmate the menace of the hoodlums. He equally told the meeting that residents of the community have fled their home because of fear of being attacked.

In his own submission, Oba Gisanrin, the traditional ruler of Isonyindo community blamed the security agencies for not being proactive enough to address the excesses of the hoodlums.

He commended the Lagos State Commissioner of Police, Mr. Fatai Owoseni for visiting the troubled community that shares border with the “City of Aquatic Splendor”.

The Deputy Commissioner of Police in charge of Operations, Mr. Bello Makwashi, however, countered the submission of Oba Gisanrin that the police had been on the ground since trouble started at Ibafo area.

The police boss explained that an APC, two teams of police mobile force were deployed to the area. He said that the police overpowered the suspected militants, hence, the exodus to Ogijo axis.

Makwashi noted that there were certain challenges confronting the police but allayed fears and added that they were on top of the situation.

The police boss said, “We have units of PMF and SARS operatives fully on the ground. There are certain challenges we have to take care of. We want to assure you that the activities of the hoodlums would be checkmated.

“We are collaborating with the state government and other security agencies. We can only appeal through you that residents should return home. Our presence is heavy to confront the criminals.”

Describing the fatal incident, the SSG said the attack on some of the Ogun communities which border Lagos State, was nothing but a major onslaught.

Adeoluwa said that the Federal Government had been contacted on the issue while appreciating the effort of all the security agencies in the state.

He owned up that the police only cannot confront the criminals, maintaining that if the security agencies had not put up their best, the situation would have been worse.

The SSG said the development was a  serious concern and called on the government at the centre to provide the state with a joint military task force like it had in the Niger-Delta area.

Nothing kills marriage faster than…