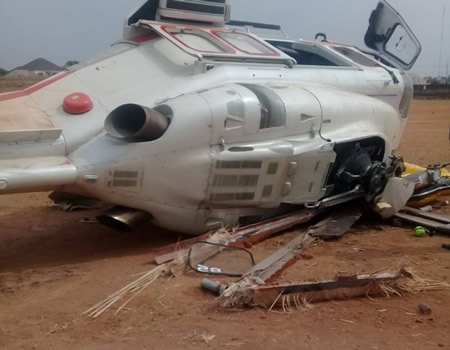 A religious organisation under the auspices Coalition of Christian Groups For Good Governance (Nigeria and Diaspora) have called on the Federal Government to begin an investigation into the crash of the helicopter carrying  Vice President Yemi Osinbajo in Kabba, Kogi State.

The coalition who stated this on Saturday also sought for prayers on behalf of the Vice President, who, it said, had escaped plane crash twice within seven months.

The President of the Coalition and Chairman, Congress of Northern Nigeria Christians, Rev. Daniel Kadzai, made these demands in a statement issued in Abuja.

He said “Similar suspicious incidents have happened in the past without probe. This particular one should be thoroughly investigated”.

Kadzai said, “till date, nothing had been said about the investigation into the Helicopter crashes of these great people. This has raised serious suspicion on the frequent crash involving top Christians in Nigeria.

“While we call on Christians all over the country to pray fervently against any form of manipulations against the Vice President, Pastor Yemi Osibanjo, we also demand a thorough investigation into the cause of the crash.

“Similar suspicious incidents happened in the case of late governor Patrick Yakowa of Kaduna State, late Andrew Owoye Azazi and late AIG John Haruna who lost their lives in mysterious Helicopter crashes. Till date, nothing has been said about the investigation, thus raising serious suspicion on the frequent crash involving top Christians in Nigeria.”

“From the body language of VP Osinbajo and other Christians in government, it is obvious that they are either under threat or under some powers in Aso Rock. Hence, they need the prayers of all Christians in Nigeria for spiritual deliverance”, he added.