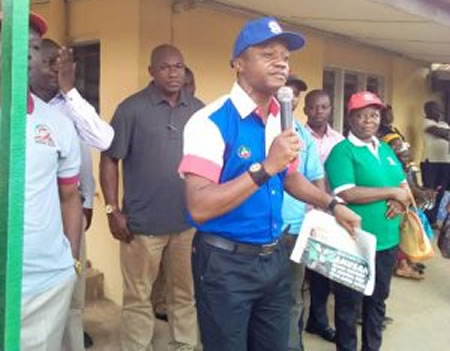 THE national vice chairman of the Joint Health Sector Unions (JOHESU), Dr Ogbonna Obinna, has maintained that unless the Federal Government acceded to the union’s request by honouring the agreement it signed with the health workers, the ongoing strike would continue.

This was as he stated that there had been 70 per cent compliance rate with the directive on the strike action, adding that state-owned hospitals and Primary Health Care centres had also been put on red alert and had been given 15 days to issue ultimatum to state governors, after which they would join the strike action.

Obinna, who stated these in an interview with Sunday Tribune, at the weekend, said: “From our situation room, we have 70 per cent compliance all over the federal tertiary hospitals in Nigeria. Then the state-owned hospitals and Primary Health Care (PHC) centres have been put on red alerts and they are given 15 days to give ultimatum to their state governors and by the 2nd of May, if government does not rescind its present stand or accede to our requests, health workers in state-owned general hospitals would definitely join the strike.

But, the Federal Government, on Saturday, appealed to members of JOHESU to end the strike they embarked upon since last week.

The Minister of State for Health, Dr Osagie Ehanire, who made the appeal at the turning of the sod of the Federal Medical Centre Annex in Abeokuta, urged the health workers to return to the negotiation table so as to reach a compromise with the government on their demands.

He reassured the present administration’s commitment to giving prominence to the health sector and the provision of medical services to the masses, especially those at the rural areas.

He also sought for the cooperation of relevant stakeholders towards reviving the sector, restoring the confidence of the people and reduce incidences of medical tourism.

According to Ogbonna, “our demands are very simple though they are many, but we have summarised them into five points. The first one is underemployment of health care professionals. Number two is the issue of adjusted core health salaries and number three is the issue of government implementing all court judgments. Number four is the issue of payment of the arrears, while number five is the reduction of retirement age to 65 years and the last one is the issue of Public Private Partnership (PPP).”

“The government wants to privatise all public hospitals and we are saying no; that Nigerians cannot be paying more for health care services.”

Commenting on the possibility of the Federal Government making overtures to JOHESU to reach a truce on the strike, he contended that “we are waiting for them and they are not even in the mood of negotiation again, because we have had several negotiations that have been distilled into agreements and now what we are waiting for them to do is to start to implement the various agreements that have been reached with us.”

“If there is going to be negotiation, it is just going to be how many months are they going to pay from the backlog of the accrued arrears. We have reached useful conclusions on all of these issues raised, it is just the ability to implement these agreements that have been prolonged for almost four years now,” Ogbonna remarked.

Ogbonna, who is a staff of OAUTHC, Ile-Ife, stated further that, “we are telling Nigerians that we are very sorry the government allowed this to happen, the lackadaisical approach of government caused this situation. We want them to bear with us and also use their goodwill to pressure the government to answer us.”

He averred that “internationally, out of 183 nations of the world, we are 179 on the list, before we get to the bottom, we needed to do something. The indices will surely increase, the mortality and morbidity rates would increase and we know that poor Nigerians may not have the wherewithal to go for medical tourism like politicians and the rich.

“But if we don’t address this, how would our health indices improve? They are muzzling those providing health care services. When we are not motivated and mobilised, how can we give our best?,” he queried.

(BREAKING): Court awards Nnamdi Kanu N1 billion over invasion of his home by…