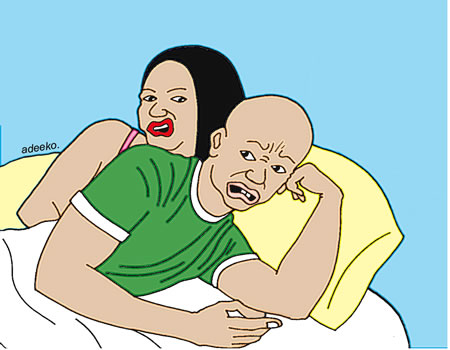 28-year-old Temilade had dragged her 38-year-old husband to court accusing him of deceit, neglect and lack of care. In addition to her prayer of divorce was the request for the custody of the only child produced by their marriage.

Ayo agreed to divorce while he refuted all his wife had said.

“My husband is deceitful and can kill, “Temilade stated before the court.

“He was reluctant taking me to his parents while we were courting despite putting much pressure on him. He later came along to my place with a lady she referred to as her elder sister.

“I was pleased meeting her and we related quite well. She was the one who represented my husband’s family on our wedding day and signed the marriage register on their behalf.

“My husband and I moved in with her after our wedding ceremony and we were all sleeping in a room. She slept on the floor while we both shared the bed.

“My lord, to my surprise, my husband would get out of bed in the night on the pretext that it was hot and would join his so-called sister on the floor. Every time he did this they would end up having sex. “This became a recurring event. It then dawned on me that both were lovers and that they had deceived me all these while, the plaintiff stated.

“His behaviour towards me changed after the cat was let out of the bag. He turned cold towards me and neglected me. The fact that I was expecting his baby didn’t change things.  He, in fact, started fighting with me and beating me.

“He refused to give me money for pre natal and ante natal care. It was my sister who bought me the baby items while my parents paid for our discharge after I put to bed.

“I left for my parent’s place when the treatment he meted out to me became unbearable. My dad went to see him few days after I moved to their house. He promised to be up to his responsibilities but failed.

“My lord, I no longer love or trust him, please separate us, “she prayed the court.

“I didn’t deceive her. The lady in question is my sister.  My sister welcomed her into our family and took good care of her but she ended up soiling her name. She went with me to see my wife’s family members when we were planning for our wedding and her parents told us it was not their practice to demand for dowry on behalf of their female children.

“I started preparing my breakfast when she took in so as not to stress her while there was never a time I raised my hand to beat her.

“I gave N3, 000 per month to run the home and this aside the N100 I give her every day. The day she moved to her parents’ house I gave her bus fare not knowing that her intention was to move out of my house, “he stated before the court.

Giving their evidence, the first witness, Temilade’s mother, Toyin Yussuf told the court, the only person Ayo introduced to them as his family member throughout the time their daughter was married to him  was this woman who they later discovered was his lover. According to her, she introduced her as his elder sister. She stated that they have been responsible for Temilade’s upkeep since she became pregnant.  She added that they provided the financial, medical and material needs of both mother and child during pregnancy and after child birth. She, therefore, prayed the court to dissolve their marriage so that her daughter could move on with life.

The defendant’s  father, Sarafa Olaniyi who is also a  witness  stated before the court that his son was irresponsible and that he had abandoned him since he took ill  about seven years ago. He disclosed that neither him nor his other family members knew Ayo was married.  Sarafa pleaded with the court not to dissolve their marriage because of the child involved.

Giving his judgment after listening to all parties, Olaniyi observed that their marriage had broken down irrevocably.

Ruling, he dissolved their wedlock and gave custody of their son to the plaintiff.

The defendant was ordered to pay N3, 000 monthly for their child’s upkeep and be responsible for his general welfare.

He was also directed to give his father money which would cover his fare to court and back home.

I became an actor by chance —Actor Michael Okon

‘I bought the land we built on, but my husband now threatens to set my room ablaze’