He still beat me after I bought him okada, built the house we are living in —Wife

•I brought her from the village, give her N1,500 to cook, yet, she’s seeking divorce —Husband 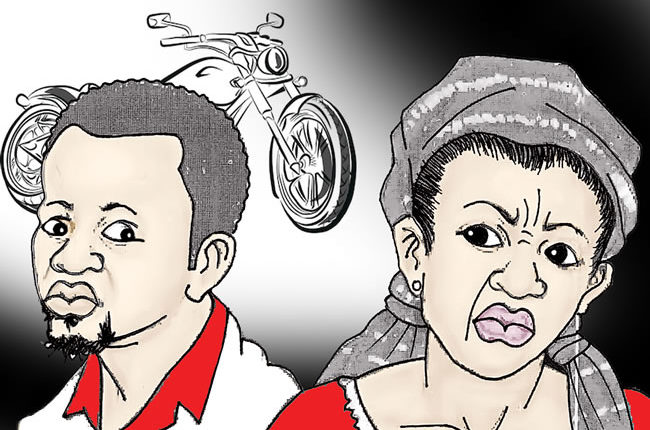 Justina in the divorce suit brought against her husband claimed that he was irresponsible and indifferent to her welfare and that of their four children.

The plaintiff told the court that her husband made her life miserable. According to her, apart from being a drunk, he treated her like his maid and was in the habit of beating her always.

She as such entreated the court to put an end to their relationship.

Evans refused to admit to divorce.

He denied all the allegations brought before him by his wife, but admitted to beating her once.

“My lord, please don’t let my husband kill me,” Justina begged the court.

“He has a friend who is an herbalist and he boasts every day that he has sought his friend’s assistance to kill me,” Justina stated.

“Evans is self-centered. He has never shown any concern for me and our children. He shows no interest in our welfare. He cares only for himself.

“There is no rapport between my husband and me. We hardly discuss in the home. He treats me like his slave and will always beat me till I bleed.

“He is in the habit of borrowing money from me, but would fail to pay me back. Any time I asked for my money, he would go irate and fight me.

“Evan spends his income on alcohol. He would drink till he was drunk and stagger home.

“I bought him a motor cycle for commercial purpose, but he failed to make a living from this.

“My husband till date doesn’t how our children got enrolled in school and how much they paid as school fees.  I’m the one who had always borne the responsibility of their education.

“Rather than show our children love and care, he took to maltreating them.

“He always insists that I buy him anything I buy for myself, most especially clothes. Hell was always let loose any time I refused.

“My lord, I’m the one who built the house we are living in. He didn’t contribute a dime towards the building.

“I’ve suffered enough in the hands of my husband. My mind is made up on divorce.

“I appeal to this court to end our marriage and rule that he moves out of my house,” she concluded.

“My lord, despite the fact that all Justina had said are lies, I pray this court not to dissolve our marriage,” Evans prayed the court.

The defendant stated that, “I built the house we are living. I bought the land we built the house on in the name of one of our children who is an only son, Victor, but Justina later changed the name on the agreement paper to hers,” Evans explained.

“It is true that I beat her but this was only once in the 34 years that we have been married. It was unfortunate that that her nose got broken while I was punching her, “Evans explained.

“I brought Justina from the village, but she has now grown wings and wants to divorce me after I fed and established her in a business.

“We have a tradition which must be strongly adhered to when it comes to an issue like divorce. Our differences can’t be iron edout in this court. We have to go back to the village.

“I’m the one feeding my family. I give my wife N3,000 to cook for the home for five days, that is between Monday and Friday, and N1,500 for the weekend,” he stated.

Giving his judgment after he had heard both parties, the court president, Chief Ademola Odunade, dissolved their union.

He granted custody of their last child to the plaintiff. According to him, the first three were old enough to decide where they wanted to stay.

The defendant was mandated to give their last child N5,000 every month as feeding allowance.

He was also asked to be responsible for her education.

Odunade also ordered him to always make himself available any time she is in need of medical attention.