He poisoned my water, soup after my family sponsored his trip to Dubai —Wife

•She put charm in her private part, made me feel itching, hot sensation any time we had sex —Husband 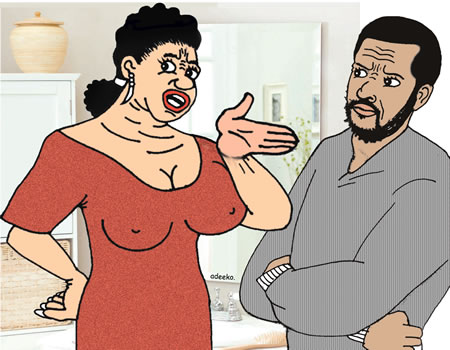 Hawawu, who approached the court, alleged that her husband was irresponsible and diabolic. She added that he was always accusing her of engaging in extramarital affair and would beat her.

She thus begged the court to stop their marriage and grant her custody of their four children who are mostly female.

Hawawu also prayed the court to make her husband responsible for their children’s welfare.

Nurudeen agreed that their union be dissolved.

The defendant, who denied all the allegations brought against him by the plaintiff, stated that she was promiscuous.

He told the court he caught his wife and her lover more than twice in a compromising state.

Nurudeen explained that Hawawu was diabolic and that she kept charms in their home.

He added that he once took ill after having sex with her and that he almost died.

“My lord, Nurudeen has made my life miserable. He has succeeded in frustrating me. I never bargained for all the horrible experiences I went through married to him. I, therefore, prayed the court to end our marriage. I’m no more interested in it.

“But my lord, I pray that all our children be put in my care. They are mostly female and thus need my constant supervision and motherly care,” Hawau pleaded.

She added that “my husband and I started experiencing crisis in our marriage in 2015 and since then things have gone from bad to worse.

“I bought myself a wristwatch for my birthday and hell was let loose when my husband saw it.

“He accused me of engaging in extramarital affair and alleged that my lover bought it for me. I did all I could to disabuse his mind but he refused to be reasonable.

“He beat me to a pulp and poured water on my bed that night.

“My family members mediated in the issue five times before it was finally resolved in 2017.

“My parents felt he was behaving irrationally as a result of the downturn of his business and decided to sponsor his trip to Dubai for greener pasture.

“My parents and siblings raised a meaningful sum while he also sold the tricycle we jointly bought for commercial purpose at N150,000 for the trip.

“My lord, my husband never communicated with me for once throughout the three months he spent there. He was later deported. It was one of his friends who was also in Dubai who informed me that my husband would be coming back home in four days time. I wept bitterly when I heard this.

“He was without a job for three months after he returned. He later went to his sister in Abuja who said she got a job for him. He was there for another three months but came back with nothing.

“I gave him N120,000 while he raised N150,000 to buy a tricycle for commercial purpose. This money went down the drain after he invested it into plank business instead of buying a tricycle as we initially planned,” the plaintiff said.

Hawawu further said that “my husband started behaving irrationally after this. He accused me of having extramarital affair and would come to my shop to fight with my customers who were mostly male.

“My lord, my husband is diabolic. He sought spiritual means to destroy me. He once poisoned my water and at another time my soup.

“I prepared him rice during the last Ileya festival. He lied that I poured spiritual perfume in it and stormed out of the house. He told as many as cared to listen that I poisoned his food.

“Nurudeen accused me of calling a man in the night. He beat me and sent me out of our room. I started sleeping in the living room since then.

“My mother on seeing the stress I was going through advised that I go and rest for a while at one of my siblings’ place.

“My husband took our children to his parents at Gbongan after I left home. My lord, they have not stepped the classroom this session,” she stated.

Nurudeen giving his testimony said: “My lord, all my wife said is a lie. I never beat her nor poured water on her bed. Neither am I diabolic.

“Hawawu is the one who is diabolic. I caught her bringing down a charm from the top of her wardrobe and reported her to her parents.

“I likewise saw her when she was putting poison into my soup.

“My wife treats me with contempt. She would kneel down to greet our male neighbours and friends but would pass insult on me in their presence,”  the defendant told the court.

He added: “My lord, the relationship between Hawawu and I was intimate until she started engaging in extramarital affair.

“Hawawu refused that I come to her shop but entertained her lover there. My lord, I have caught them in a compromising state more than twice.

“I once met this particular man in her shop late in the night. The whole place was dark and they were the only ones there.

“At another time, I caught them in a corner in the dark. They were both shocked to see me.

“We fought after this and she left home. She was away for 15 days and left no clue as to her whereabouts. My lord, I was convinced she was with her lover.

“When Hawawu finally surfaced, she lied that she lost her senses after she took a commercial bicycle and that she later found herself in Sango Ota.

“My lord, sex with my wife suddenly became a punishment instead of pleasure. Any time I had sex with her, I would feel itchy and burning sensation on my penis and this would last for days.

“I decided never to have sex with Hawawu any more when I took ill and was hospitalised after having sex with her. I was advised to seek spiritual help when all efforts by the doctors to restore my health failed.

“I was sure she put something in her vagina in order to discourage me from making love to her while she had bouts of love making with her lover.

“My father in-law intervened in our differences and invited Hawawu’s lover who she lied was her spiritualist. This man lied about his identity but was later found out.

“My wife insisted at the meeting that she was no longer interested in our marriage.

“My lord, I agree to divorce. I want Hawawu out of my life,” he concluded.

Giving his judgment, the court president, Chief Ademola Odunade, dissolved their union and granted the plaintiff custody of three of their children who are female.

The defendant was asked to pay the sum of N12,000 monthly through the court as their children’s feeding allowance.

He was also asked to be responsible for their education and health care.

Can I marry a lady with AS genotype?