He neglected our children’s education, sent his lover’s children to school —Wife

•She’s promiscuous; our first child is not mine —Husband 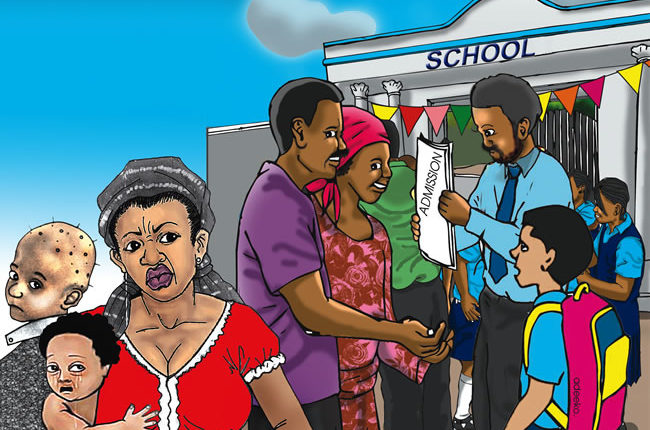 Sera, who dragged her husband to court, accused him of constantly shirking his responsibilities towards her and their four children and constantly beating her.

She added that her husband engaged in extra marital affairs and was in the habit of paying the school fees of his lover’s children while he contributed nothing towards their children’s education.

The plaintiff stated that the defendant packed her property out of their abode and attempted to sell them.

Sera prayed the court to end their relationship and grant her custody of their four children.

She further appealed to the court to make her husband responsible for their welfare.

Rashidi agreed to divorce but denied all the allegations brought against him.

He accused Sera of infidelity. According to him, their first child isn’t his.

Sera, giving her evidence, said: “I never knew I was signing off my joy when I got married to Rashidi.

“I’m from the North, Kaduna State precisely. We met in Kaduna and got married there.

“I have not enjoyed my union with Rashidi for a minute since we got married 23 years ago.

“My husband is irresponsible and has failed in his duties towards me and our children as the head of the home and breadwinner.

“We were living in Ondo State but later moved to Ibadan.

“While in Ondo, Rashidi lived a reckless life. He would bring his lovers home not minding my disposition to this.

“My lord, my husband neglected our children and never contributed a dime towards their education. I was the one who enrolled every one of them in school and have been responsible for the demands of their education.

“Rashidi spends his income on his lovers. He went as far as paying their children’s school fees and meeting their other needs.

“I ran from pillar to post, seeking fund to send our first child to secondary school. He never gave us his support.

“My husband relocated to Ibadan and abandoned me for two years after I had our baby.

“I was dragged to court by our landlord when the rent was due and Rashidi refused to pay. Our property was thrown out.

“I was the one who sourced for money to rent a new apartment before I later joined him in Ibadan.

“My husband took to beating me when I relocated to Ibadan. He would beat me and destroy my property. He has almost ruined me, “she stated.

She added that, “Rashidi again showed no concern when I lost my father. He never called to condone with my family members nor contribute towards the burial ceremony.

“My lord, it’s unfortunate that his sister is not in court today to stand as my witness.

“She was the one who advised me against aborting our first child’s pregnancy when Rashidi impregnated me.

“I have told him if he marries another wife, she will never bear him a child for ever denying paternity of our first child.

“Rashidi returned from Ondo one day and removed all our belongings from our apartment without informing me. His other family members also came to fight me. They got me arrested by the police while my husband attempted to sell my property.

“My lord, all I’m praying the court is that it separates us and grant me custody of our children. Our last child who is aged four is presently with my father in-law who has failed to enroll him in school.

“I also entreat the court to order him to return all my property to me,” Sera concluded.

In his evidence, Rashidi said: “My lord, Sera is a slot. She brings her lovers home when I’m not around. I’m also fed up with her. I agree that we go our different way.

“I’m declaring before this court that our first child is not mine. She brought him into our marriage. Our marriage is blessed with only three children.

“She already had a baby when I met her in the North. Her mother told me the man responsible for the baby refused to claim him.

“We initially settled in Ondo but later relocated to Ibadan because my business nose-dived.

“I went back to Ondo after my business picked up again. I always return to Ibadan with foodstuff enough to last each month.

“I encouraged her to learn hairdressing; she did and she graduated.

“I rented her a shop and bought her the needed equipment but she was never serious on the job.

“Sera hardly stayed in the shop and as such she couldn’t make a living from the vocation.

“My lord, my father informed me that my wife was involved in extra-marital affair.

“According to him, the person she’s dating is a Hausa man.

“She knelt down and begged me when I confronted her with this, but failed to end her affair with this man because she has bad friends who influence her.

“I demanded that she moved back to Ondo with me but she refused.

“I came home during the last Ileya festival and met an empty house. Sera didn’t return home until 9:00 p.m.  She refused to prepare my food that night. She cooked her meal and ate it in my presence.

“I got a call from my brother informing that Sera’s lover was in our place and that he claimed he rented the house for her.

“I moved my belongings away from the apartment into our family house. I don’t have any of her belongings with me.”

Ruling after he had listened to both parties, the court president, Chief Ademola Odunade, observed the relationship between the two was strained.

Ruling, he dissolved their marriage and granted custody of their last two children to the plaintiff.

According to him, their first two children, aged 23 years and 21 years were old enough to decide where they would like to live.

The defendant was asked to give the plaintiff N5,000 to pack her belongings from his house.

Odunade also made the education of their children the defendant’s responsibility same with their health care.

My wife beats me blue black, please separate us before she kills me, man begs court

My wife stole my money, poisoned me, sent assassins after me —Husband

My husband urinates, defecates in his clothes when he’s drunk —Wife