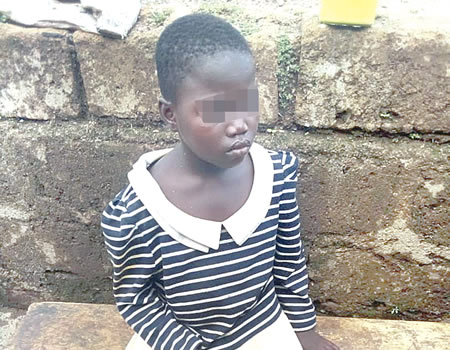 He came into our house and asked my siblings to go outside. Suddenly, he grabbed my neck and I began to scream. Then he raped me.” These were the words of 10-year-old Mariam Mohammed who resides in the agrarian community of Ila Orangun in Osun State.

Mariam was allegedly defiled by Fatai, a 28-year-old man popularly known as Gbodorogun (someone who carries mortar to warfront). Gbodorogun is a heavily built, short, dark-skinned man with wedge-shaped nose and sharp cheekbones. He is also known for functioning as a masquerader for one family house in Ila.

It was alleged that Gbodorogun’s assault on Mariam was not a one-off incident. He has raped her on two previous occasions, it was gathered. The suspect allegedly first raped Mariam in 2019. The victim was said to have suffered temporary paralysis as a result of her encounters with her assailant. Her last encounter allegedly saw Gbodorogun use a leaf to wipe her private part after which she lost consciousness. Mariam was said to have excreted a black substance while she was being treated by a cleric, to whom her mother had taken her for spiritual healing.

He defiled and made my daughter ill –Victim’s mum

“The last time he raped her, he used a leaf he got from a herbalist to wipe the blood. She lost consciousness that day after telling us about the incident, and that was the last time she spoke. When we rushed her to the hospital, the doctor advised us to seek spiritual help, saying her situation was beyond drugs or conventional treatment,” Mariam’s mother said.

“I took my daughter to a cleric where she was treated. She regained consciousness after she excreted a black substance. We heard that this man has raped many other young girls and that he always asked his victims to first lie down on a white cloth,” she added.

A resident who described himself simply as Azeez and claimed to be a neighbour to the victim said the suspect had repeatedly visited the apartment of the victim but her parents were not suspicious. He said: “Fatai is a very diabolical person. He functions as a masquerader, so the parents of the victim were afraid to challenge him after the girl told them several times about how he sexually abused her. Mariam is not his only victim. After the police arrested him, many people began to narrate their ordeals at his hand. But he was initially released and leaders of the community decided to seek justice for the victim.”

He threatened to kill me, curse my family ―Victim’s father

Mariam’s father, Mr Sule Mohammed, said Fatai had been threatening to curse his family should the police re-arrest him for raping his daughter.

“I noticed that Mariam couldn’t play with her peers again. She was nauseated all the time. I squared up to Fatai after the police released him from their custody. That led to a brawl between us. He came to my house in the evening of that day to curse my family. He said our claims were unfounded.

“Fatai slept with my daughter about three times but each time we challenged him, he rained curses on my family. We tried to settle it amicably. The last time he assaulted my daughter, it was for ritual purposes but she was saved before it was too late,” Mr Mohammed said.

The Osun State Police Public Relations Officer, Mrs Yemi Opalola, confirmed the suspect’s arrest, saying that he had canal knowledge of the victim in June and December 2019 before the latest act which he did on May 11, 2020.

She said the suspect who was initially released had been rearrested and had been making confessional statements to the police.

Further investigations, the PPRO said, were ongoing to establish the extent of his possible “unholy” acts with other minors in the community.

I want to go back to my parents, says child-wife accused of stabbing husband to death