He fights me with dangerous objects, broke my hand with iron rod —Wife

•I beat her ’cos she’s dating another man, comes home late —Husband 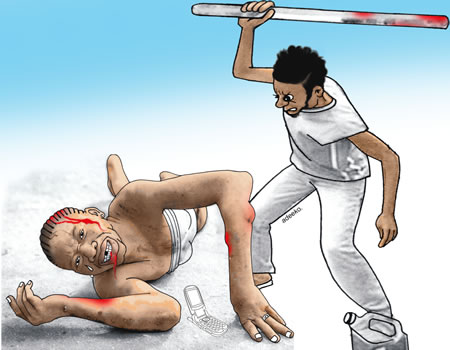 Kafayat who dragged her husband to court accused him of wickedness, brutality and violence.

The plaintiff added that he was always threatening her life.

She thus implored the court to put an end to their relationship and put their children in her care.

She also pleaded with the court to make him responsible for their upkeep.

Kazeem admitted to claim saying there was no more intimacy between him and Kafayat.

Ruling after he had heard both parties, the court president, Chief Ademola Odunade ruled that their union be dissolved.

He granted custody of their two children to the plaintiff and ordered the defendant to be responsible for their welfare stressing that education and health care must be given upmost priority.

He was also asked to give the plaintiff N10,000 monthly as their children’s feeding allowance.

Kazeem in addition was mandated to carry out community service for brutalising his wife.

Giving her evidence, Kafayat stated that: “My lord, Kazeem will cut short my life if I stay a minute longer under his roof.

“I have not enjoyed our wedlock for a second since we got married fourteen years ago. Our union is obviously void of the bliss and intimacy couples enjoy in their relationship.

“Kazeem has no regard for me. He doesn’t treat me like his wife. He relates with me like a rag which is used and discarded of.

“My husband is wicked and difficult to relate with. Nothing excites him or makes him happy.

“Kazeem seeks every opportunity to beat me. He seeks fault in all that I do and will raise argument after which he will beat me mercilessly.

“He has beaten me to a state of coma many times. I would have died but for neighbours who came to my aid.

“He threatens me with dangerous objects and sometimes hurt me with them.

“My lord, my hand is put in a cast because my husband hit it with iron rod. He hit me with the iron after beating me to a pulp. I fainted because of the excruciating pain I felt from it. I have been incapacitated since then.

“Kazeem has also consistently dodged his responsibility towards our children. He’s not just interested in their welfare. I bear the challenge of their upkeep because I don’t want them to suffer.

“My husband has no respect for my parents. They have sought audience with him on a number of times on our differences but he has always snubbed.

“My lord, I plead that you put an end to our marriage today and handover our children to me for care.

“I also pray that you make him responsible for their needs,” Sakirat said.

“My lord, Kafayat is a slot. I’m no longer interested staying married to a woman who offers her body to all men. I can’t wait for her to leave my home, “Kazeem stated.

“My lord, I have no control over my wife. She intentionally flouts my orders and rubs shoulders with me at home.

“Kafayat is in the habit of coming home late because she’s dating another man.  I have warned her against this illicit relationship but she has refused to change which informs my beating her always.

“Her parents unfortunately are in support of her shameful lifestyle. They take sides with her any time I report her to them.

“My lord, I’m in support of divorce,” he concluded.