He attempted to strangle me; climbed the ceiling to spy on me and a male client —Wife 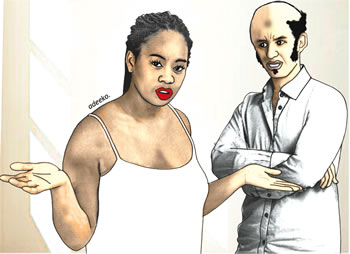 A woman and mother of two, Mary Alimi, has dragged her husband, Isaiah Alimi, before Oja Oba/Mapo Court C Customary Court, Mapo, Ibadan, Oyo State, seeking that it dissolved their 12-year-old marriage on the accounts of violence and an attempt on her life.

Mary, a prophetess, testifying before the court stated that her husband was jealous and always accusing her of infidelity.

She told the court he embarrassed her by monitoring her movements. The plaintiff explained that he dug a hole in one of the walls in her office and would eavesdrop on her discussions with their clients.

Mary stated that Isaiah went as far as climbing the roof top to spy on her anytime she was attending to male customers or church members.

She added that Isaiah was in the habit of invading into her privacy by listening to every conversation she made on her mobile phone.

The plaintiff told the court that the defendant would soon snuff life out of her because he had on many occasions attempted to strangle her during arguments.

She thus prayed the court to end their relationship and grant her custody of their two children in order that she could give them the needed care, but make her husband responsible for their needs.

Although Isaiah denied all that Mary had said, he refused to accede to divorce.

The defendant told the court that whereas he was always begging and cajoling his wife before she agreed to have sex with her, he was surprised to catch his wife red-handed having sex with one of their clients in their bedroom.

Giving his judgment after listening to both parties, the court president, Chief Ademola Odunade, stated that it was necessary that their union be dissolved since it involved violence.

He added that it was evident through the evidence given by both parties that their marriage had broken down irretrievable.

Ruling, Odunade dissolved their wedlock and handed custody of their two children to the plaintiff.

The defendant was asked to be responsible for their children’s welfare.

According to the court, he must give the plaintiff N10, 000 every month as their children’s feeding allowance. This Odunade instructed must be carried out through the court.

Mary giving her evidence said:”If I stay a minute longer in marriage with my husband he will snuff life out of me.

“Isaiah is wicked and violent. He had sworn that I would know no peace in our marriage.

“He has constantly accused me of infidelity and has never ceased to embarrass me by monitoring my movements and activities.

“Isaiah listens to every conversation I make on phone and would always boast that he knows all my secrets.

“Apart from these, he dug a hole in a wall in my office and would eavesdrop on my discussions with our church members and clients.

“My husband sometimes went as far as climbing the roof top to spy on my customers and me when I’m attending to them.

“My lord, these shameful acts by my husband had often raised arguments between us. At instances like these, he would go irate, grab my neck and attempt to strangle me.

“I dread having sex with Isaiah these days because I always feel sick and weak after this. I could be in this state for weeks which makes me suspect that he is fetish.

“He pretends to be caring when I’m in this condition and would willingly carry out the house chores.

“I’m fed up with my husband neither do I want to go further in our marriage.

“I, therefore, appeal to this honourable court to stop our marriage and grant me custody of our two children but make him responsible for their upkeep.

“I also pray that the court restrain him from coming to harass me at my new place of abode or work place, “she stated.

“All that my wife said are lies, but despite this I refuse to agree to divorce, “Isaiah declared before the court.

“She invited me to join her in running her ministry and I did.

“Things were going on well in the ministry because we were spiritually empowered to solve people’s problems.

“But we started experiencing a strain in our relationship after a well-to-do man from Lagos came with his wife to seek solution to their childless marriage.

“We attended to them and his wife was later delivered of a baby.

“I realised soon after this that this man was always calling my wife on phone, but she kept me in the dark of what their discussion was about.

“My lord, this man would sometimes come to see her and when he’s around, my wife would ask me to go and monitor the work going on on our site. This became the pattern.

“The last time she did this, a spirit told me to monitor her. I, therefore, climbed the roof top, removed the ceiling of our bedroom and saw them making love.

“Angry, I jumped down and banged into our room. I held the man’s legs so that he didn’t escape and he pleaded with me to forgive him.

“My lord, she lied that I make her sick after having sex with me. She has constantly refused me sex. I would beg and cajole her for about two weeks before she agreed to have sex with me, “the defendant concluded.