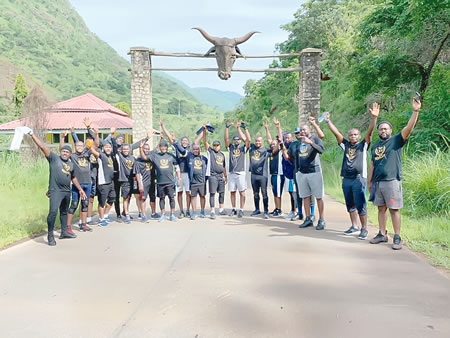 The Healthy Billionaires Fitness Club in partnership with the Ministry of Culture and Tourism, Cross River State recently embarked on a road show to Obudu Mountain Resort for a fitness challenge and facility tour.

The aim of the tour was to do a walkathon from the bottom of the ranch to the top which is a total distance of 11km consisting of 22 sharp curves and 18 U-bend on a steady incline up a mountain road for those unfamiliar with the terrain and to let the world know that the resort is fully functional and showcase its beauty to the world especially for post COVID-19 domestic travels.

The Commissioner for Culture and Tourism, Mr Eric Anderson, who flagged off the #obudumountainchallenge, stated that Cross River State is already test running plans put in place by the state to overcome post COVID-19 challenges.

This move is one of the proactive measures taken by the Governor of Cross River State, Professor Ben Ayade, for the state to remain the only state in Nigeria that is COVID-19 free to date and with the assurance that when borders finally open, the Obudu Mountain Resort will definitely be a good place to visit as we welcome the world to an unforgettable magical experience,” Anderson added.

In his remarks, the Chairman of Healthy Billionaires Fitness Club and Senior Special Assistant to the Governor of Cross River on Communications, William Archibong Jnr, who commented on the choice of name for  the Healthy Billionaires Fitness Club said the name billionaires refer to the caliber of membership who are made up of successful entrepreneurs,politicians and professionals in various fields, adding that it is important to know that your health is your wealth and ours is valued at billions in dollars.