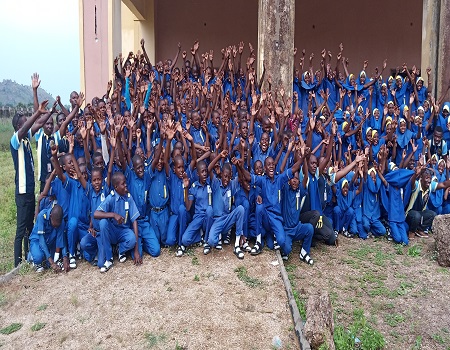 Hard work has been identified as the only thing needed for anyone to succeed and become something in life while indolence and truancy will only need to failure.

This assertion was made by the Principal of the Bauchi centre of the Rochas Foundation College (RFC) Miss Sarah Johnson Mafia while speaking during the 57th birthday celebration of the Founder of Rochas Foundation, Sen Owelle Rochas Anayo Okorocha which was held on Monday.

Sarah Johnson opined that it was hard work and dedication that helped Rochas Okorocha to become great in life considering how he was raised to become famous stressing that whoever does not recognise hard work is bound to fail.

She called on students of the College to make hard work their watchword for them to excel pointing out that the 10 commandments of the Rochas Foundation College throughout the country are hard work, dedication to duty and courage to face challenges.

The Principal of the RFC, Bauchi then advised parents to ensure that their children got quality education because according to her, education is cheaper than ignorance which may lead to destruction.

Chairman of the occasion, Bauchi State Head of Civil Service, Nasiru Mohammed Yalwa commended the Founder of the Rochas Foundation, Sen Owelle Rochas Anayo Okorocha for establishing the College in Bauchi State saying that it has complemented government’s efforts in the education sector.

While going down memory lane to recount how the application for the establishment of the College was speedily treated by the Ministry of Education where he was the Permanent Secretary declared that there is no reason for him to regret been part of the approving authorities.

The HoS stressed the importance of education in nation building saying that no amount spent to educate a child is too much because according to him, illiteracy is a deadly disease that must be tackled with every seriousness.

He then wished Owelle Rochas Anayo Okorocha more years of positive contribution to the growth and development of education in the country.

In his goodwill message, the Managing Director of Bauchi Radio Corporation (BRC), Alh Surajo Ma’aji commended the Founder of the Rochas Foundation, Sen Owelle Rochas Anayo Okorocha for embarking on the humanitarian venture of providing education to indigent children in the society who ordinarily do not have a hope of going to school.

Surajo Ma’aji while applauding the efforts of Rochas Foundation called on other well to do Nigerians to emulate such gesture because according to him government alone cannot do everything for the generality of the people.

The BRC MD then assured that his station which has a very large network across the country will join the RF in promoting education by airing educational programs on the frequency.

Various ethnic cultural group prominent in Bauchi state made presentations to the admiration of the parents who graced the 57th birthday celebration of the Foundation of the Rochas Foundation.