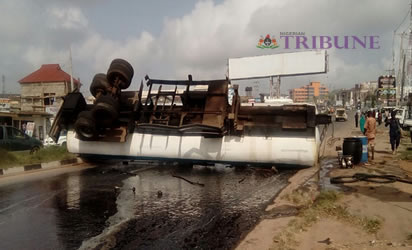 The tanker of an articulated vehicle fully loaded with petrol tumbled on the popular M.K.O. Abiola Way, Ring Road, Ibadan, spilling petrol on the busy expressway.

The incident which happened around 9:00 am, caused commotion on the road, as the tanker blocked the entire express road, causing traffic build up.

The tanker said to be coming from the Lagos depot of Nigerian National Petroleum Corporation (NNPC), was said to have developed brake failure after negotiating the Olusanya roundabout. No casualty was reported.

According to an eyewitness account, the driver after noticing the brake failure, in a bid to avoid collision with other vehicles, made a swift turn on the road, after which the tanker tumbled forcing it to a halt.

How Buhari’s son, Yusuf, broke his limb in bike accident