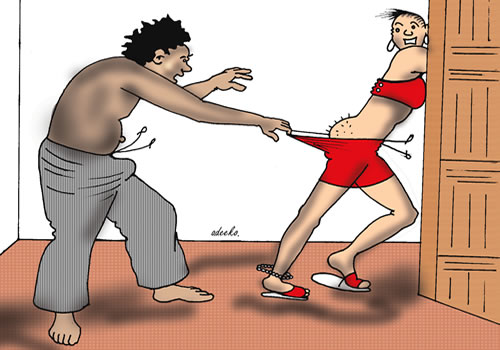 It has been argued that cases of violence against children are usually under-reported and thus survivors, witnesses and their families are encouraged to speak out. However, speaking out can also come at a cost which further instils fear. Two recent cases come to mind which the Network on Police Reform in Nigeria (NOPRIN) had written petitions to the Lagos State Commissioner of Police to do all in its power to ensure that the culprits in question are apprehended and justice is served.

A 15-year-old school girl was gang-raped in Ikorodu, Lagos in February 2018, by four men. She has been living with the trauma of threats that she would die for reporting the incident or if she failed to honour any sexual invitation from the men who raped her. They also threatened to upload a video of the rape online. When the girl’s family reported the matter to the Ijede Divisional Police headquarters and the police headed for an arrest, the family members of the culprit assaulted a police officer as well as one of the girl’s brothers.

The same year in Amuwo Odofin, Lagos, a 16 year-old girl was reported to have been abducted by a man to his house where he raped her.  The child was afraid to inform her parents about what had happened to her. Eventually, she got pregnant from the rape and the incident was reported to the Gender Unit of the Lagos State Police Command in October 2018. Prior to this, when the girl informed her rapist that she was pregnant, he provided her with some pills which nearly took her life – it was at this stage that her parents found out.

While the number of domestic violence cases increased by 817, the incidence of child abuse and defilement rose by 251 and 37 respectively. Rape cases was 24 higher compared to the 2017 report.

Nigeria is ripped with several cases of VAC such as these, however, several factors work against the child in the quest to curb the menace. A new report published by UNICEF and the Federal Ministry of Women Affairs and Social Development, notes that “about half of Nigerian children reported some form of physical violence prior to age 18 years by an intimate partner, parent, adult relative, or community member”

Unfortunately, there are clauses in Nigeria’s Penal and Criminal Codes, customary laws, where gender based violence as well as certain degrees of violence against children, are not punishable.

However, at the judiciary and policy level, more effort needs to be put into prosecution, bringing justice to victims, provision of adequate psychosocial care to cater for the trauma experienced by survivors.

A lot of work also needs to be done at the law enforcement level to equip the security forces such as the police, with the skills required to handle cases of child abuse and other related abuses.

Finance, one of the challenges in every business —Inems Events CEO

FG must not pamper renegades