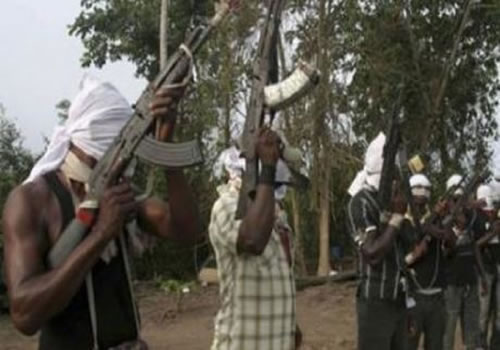 Gunmen, on Sunday, invaded Kambang-Malul village of Daffo District, Bokkos Local Government Area of Plateau State and killed the village head and one other person.

Even as armed robbers also stormed a shop and shot four customers while irate youths also set a police station ablaze over missing manhood in Mangu Local Government Area of the state.

Tribune Online learnt that the gunmen suspected to be Fulani militias on Sunday ambushed the village head, Mr Musa Ataka, and one Danjuma Take while returning from a visit to a friend at a nearby village and stabbed them to death.

A source close to the village revealed that they were macheted by the assailants to confirm their death before they bolted away adding that their remains were discovered by passersby who alerted their relations.

The source further disclosed that the corpses were taken last night and deposited at the mortuary of Luna Hospital, Bokkos as the burial of the deceased is yet to be slated.

In a related development, four persons were shot by armed robbers at Point of Sales (POS) shop on Sunday at Panyam District of Mangu Local Government Area of Plateau State.

Tribune Online learnt that the incident occurred at about 9:00 pm when the robbers numbering about five forced themselves into the shop and shot four customers transacting business and collected an undisclosed amount of money from the shop owner before they disappeared.

The shop owner escaped the robbery incident unhurt while those shot were taken to COCIN Rural Health Hospital Panyam for treatment.

Also, irate youths in Ampang District of Mangu local government over the weekend set the Police Station in the community on fire over alleged plan by the police to shield a man who was accused to be responsible for the disappearance of a trader’s manhood.

It was gathered that on realising that the man’s manhood has disappeared, the suspect was taken to the police station for justice and possible restoration of the missing manhood.

According to a source, while the police were trying to resolve the matter, youths in the community besieged the police station insisting that the suspect be released to them for jungle justice but the police refused to assent to their demand.

“But when the police discovered that the youths were becoming unruly, they invited Operation Safe Haven in charge of security in the state which whisked the suspect away. At this point, the youths descended on the police, overpowered them and set the building ablaze,” the source said.

Attempts by Tribune Online to confirm the incidences from the State Police Public Relation Officer, ASP Ubah Gabriel, proved abortive as several calls put across to him were not answered.