Gunmen on the rampage kill seven, burn vehicles, declare ‘no election in Anambra’ 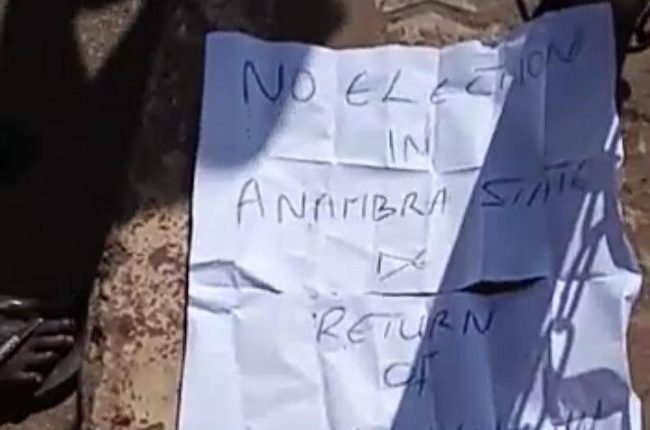 Gunmen struck late afternoon on Tuesday, September 28, at Eke Nkpor market area of Idemili North Local Government Area of Anambra State, killing six people there. Another was said to have had his head slashed with a cutlass.

Nigerian Tribune gathered that the victims in the market were security officers.

The gunmen, who according to eyewitnesses, stormed the area, arrived in about two vehicles including a Venza SUV through Obosi village road unto the Nkpor-Ideani-Nnobi highway late afternoon, when most traders were getting set to close for the day.

Their presence forced everyone to scamper for safety, while shop owners quickly locked up and running in every direction without apparently knowing where to go.

According to an eyewitness, the men all wore black jeans and T-shirts and bore either a gun or machete. They also bore fresh palm leaves each in their mouths.

At a stage, the eyewitness disclosed, they pranced gingerly on the highway controlling traffic.

It was learnt they urged road users to keep moving as they were not there for anyone but for certain persons.

At Nkpor, the gunmen beheaded an unidentified male and dropped an inscription saying “no election in Anambra”.

At Ezinifite, in Aguata council area of the state, a police patrol vehicle was also burnt down. There is also an account of another bus burnt down by the gunmen.

An online video account showed the privately owned vehicle parked near the major road was mistakenly identified as a police vehicle.

Also at Oko, in Orumba North Local Government Area, the gunmen were reported to have set a party branded vehicle ablaze and shot the driver in the leg. The driver was later evacuated out of the place by sympathisers.

There was a heavy commotion in Oko especially near the Federal Polytechnic when people heard gunshots. In the ensuing confusion, vehicle owners and other road users scampered for safety in nearby villages. Some vehicles moving into Oko turned to other destinations.

Ahead of the gubernatorial election in Anambra, violent crimes appear to be on the rise. Official police report on these incidents is being awaited.