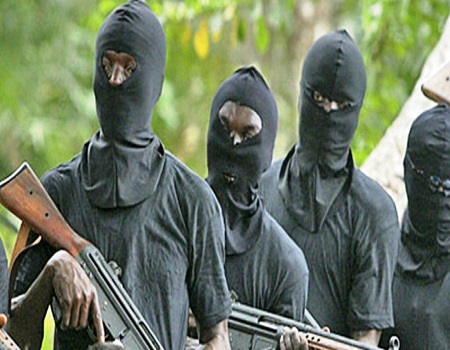 Gunmen suspected to be armed robbers, on Tuesday evening, invaded a fuel station in Akure, the Ondo State capital, killing one of the attendants, identified as Bolakale, injuring one other, and carted away unspecified amount of money.

An eye witness said the incident occurred at about 6:45 pm when the four armed men on a motorcycle invaded the fuel station and started shooting sporadically demanding for the day’s proceeds.

The men ordered the fuel attendants to hand over the day’s sales and shot him at close range while another attendant was also shot but survived the bullet wounds.

The eye witness said: “Four of them came into the fuel station on a motorcycle and ordered the attendants to hand over their sales and they did not argue with them. But as they were shooting sporadically, the bullet hit two of the attendants, killing one on the spot.

“They also shot sporadically at other people around who tried to raise alarm and escaped from the scene of the incident.”

He said the injured attendant, identified as Kazeem was rushed to the hospital while the corpse of the 32 years old Bolakale has been deposited at the morgue.

However, police from the state command who swung into action, have arrested two of the hoodlums after a gun duel with the criminals.

The two arrested suspects, Emmanuel James, 20, and Wisdom Richard, 24, were arrested at the back of Adegbemile Cultural centre in Alagbaka area of Akure.

He disclosed that some items were recovered from the suspects, which include a Markarof Pistol with 24 rounds of its ammunition, one locally-made pistol and eight rounds of its cartridges, one expended cartridges, an Infinix phone and some charms.

Ikoro disclosed that the two suspects confessed to the crime during interrogation but said an investigation is still ongoing to apprehend other members of the gang.