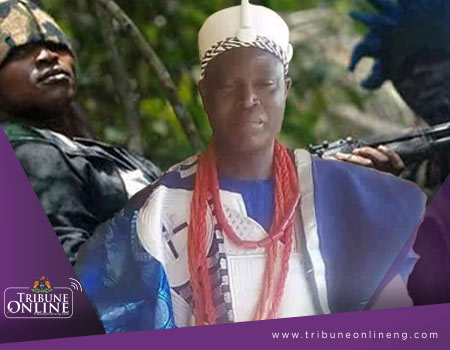 According to a source, the traditional ruler was travelling to Oba Akoko in Akoko South West Area of the state before he was abducted by the hoodlums along Ikare road.

A family source who confirmed the abduction said the traditional ruler went to Oba-Akoko to attend a social function on Saturday, revealing that he was driving himself towards Akoko before he ran into the kidnappers and was taken away by his abductors.

He explained that Oba Daodu was alone in his car when the incident happened.

He said traditional ruler had promised one of his friends in Akure from the North, asking him to wait for him in a hotel with a promise to come back early.

The source, however, told Metro that the abductors have demanded for N15 million ransom for his release.

He said policemen were working towards bringing the abductors to book and pledged to arrest the hoodlums soon.

Joseph said the police were on the trail of the kidnappers and would rescue traditional ruler unhurt.

The Akure / Owo road had been notorious for kidnapping and armed robbery in the recent past. The former Regent of Akungba, Princess Oluwatoyin Omosowon and many others had been kidnapped along the road.

2 missing as herdsmen clash with vigilantes in Akwa Ibom