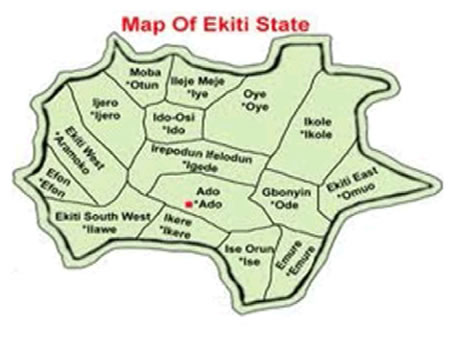 Suspected gunmen have kidnapped a staff of the Ado Local Government, Ekiti State, Mrs. Funmilola Osalusi and took her to an unknown destination.

The widow is the wife of the late Surveyor-General of Ekiti State, Mr. Felix Oladapo Osalusi, who died barely a year ago.

It was gathered that the gunmen abducted the woman at her residence located along the polytechnic road in the state capital on Saturday night.

Abutu said the incident happened around 9:20 pm when the woman was said to have been tricked by abductors out of the gate and silently ferried her away in their car.

“The armed men numbering three were said to have knocked the gate of the victim’s residence and tricked her outside.

“She was said to have come out of the gate to ascertain the identities of the guests and as she did that, the gunmen were said to have quietly taken her away in their vehicle.”

Abutu said the Police Commissioner, Tunde Mobayo, had deployed detectives to suspected bushes where the woman was taken to rescue her out of the kidnappers’ den.

Abutu added that his personnel would work with operatives of the Amotekun Corps, local hunters, Vigilante Group of Nigeria and other stakeholders to rescue the widow from the captivity.

He urged members of the public to oblige the police with timely and accurate information that could help in rescuing the woman.