The rape and murder of a teenager has shocked to its core South Africa, a country that is already one of the world’s most dangerous for women.

According to The South African, after days of searching for 19-year-old University of Cape Town (UCT) film and media student, Uyinene Mrwetyana — who was last seen Saturday, August 30 — investigators have confirmed that a man has confessed to raping and brutally killing her, and he also confessed to the crimes when he appeared in court on Tuesday, September 3.

Eric Ntabazalila, a spokesperson for the National Prosecuting Authority (NPA) in the Western Cape said the 42-year-old man, reportedly an employee of the post office, has a prior conviction for armed robbery or robbery with aggravating circumstances, as well as a case of rape that was opened against him and later withdrawn, reported The Citizen.

Consequently, protests have broken out across South Africa after the body of the 19-year-old university student was found dumped in a hard scrabble suburb of Cape Town, the nation’s second city.

University of Cape Town student Uyinene Mrwetyana had not been seen in almost a week.

This morning, I joined thousands of women and men outside of Parliament to protest against the untenable levels of GBV in this country. One of the speakers concluded her speech by saying: so many women here are asking the question: #AmINext, again?

What a smack by reality

The suspect is a 42-year-old man who worked at a post office in affluent Claremont, a suburb to the south of Cape Town’s CBD. He has not yet been named for legal reasons.

He is alleged to have attacked the first-year film and media student while at work, news.com.au reports.

The case has sparked an uproar among South Africans demanding action be taken to quell the country’s femicide rate, which according to the World Health Organisation is five times the global average.

What happened to Uyinene Mrwetyana?

Mrwetyana had gone to the post office to ask about a parcel. She was told the electricity was out at the branch and to return later, news outlet News 24 reported.

Unknown to her, the time between when she left and returned to the post office were to be her final hours.

When Mrwetyana went back to collect her parcel, her attacker was waiting.

He allegedly struck her with a post office scale, knocked her unconscious and sexually assaulted her.

Later, he is reported to have handed himself into police and told investigators where her body was hidden.

In the wake of the death, hundreds of people have flooded the teen’s Instagram page with emotional messages, while describing her alleged killer as “evil” and a “murderer”.

Local Cape Town TV has reported that angry residents in the alleged killer’s township torched his home. Station eNCA reported that Cape Town’s fire and rescue services were prevented from putting the fire out and forced to leave the area.

It has triggered national outrage about the safety of women in one of Africa’s most developed and modern nations.

Thousands of South African women took to the streets, protesting about the Government’s failure to deal with rising violence against women in the country.

Students at her university joined the protests, demanding that security on campus be boosted.

Mrwetyana’s death has sparked a viral movement, with thousands of people taking to social media to express their anger with the hashtags #NotInMyName, #RIPUyinene and #AmINext. 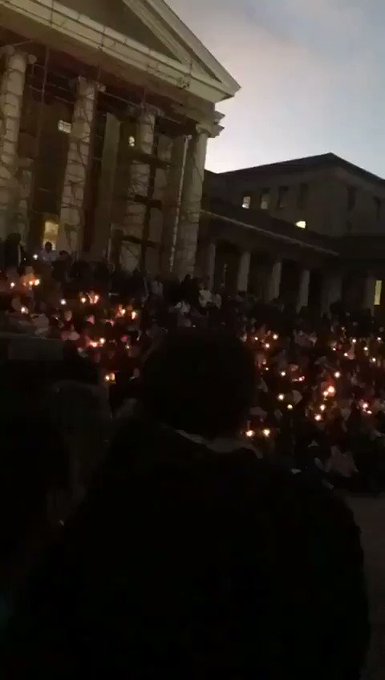 More than 400,000 signed a petition demanding the death penalty — abolished in 1995 — be reinstated for crimes against women.

South Africa is one of the most dangerous countries in the world for women.

Just a few days after Mrwetyana’s death, the country’s boxing champion Leighandre Jegels, 25, was shot and killed by her former boyfriend, who allegedly served as a police officer.

According to official statistics, at least 137 sexual offences are committed every day in South Africa, largely against women.

According to government statistics, more than 1500 people are murdered every month in the nation, which has a history of violence and profound inequality.

South African President Cyril Ramaphosa has vowed to crack down on perpetrators.

“It is a crime against our common humanity,” Ramaphosa said in a video statement that aired on Thursday evening. “We’ve heard the calls of the women of our country for action and for justice.”

Ramaphosa promised a raft of reforms but stopped short of declaring a state of emergency, one of the demands of demonstrators who have clashed with police in front of the convention centre where the World Economic Forum on Africa is under way.

Ramaphosa’s pledge to take action follows days of outrage that have gripped the country after reports emerged in the past week of several women being raped and murdered.

Among some of the measures announced by Ramaphosa to tackle the crisis are proposals for the state to increase minimum sentences and oppose all bail and parole applications for sexual offenders. He also said he would ask the country’s politicians to amend the laws governing the national sexual offenders database and propose the register be made public.

“Violence against women is a men’s problem. It is men who rape and kill women,” Ramaphosa said. “Let us not look away.”

In a statement, Dr Olive Shisana, the presidential special adviser on gender-based violence, assured the protesters the government had a plan to address the country’s problem with violence against women.

In a tweet on Tuesday, the South African Government lamented that violence and rape against women had become “so common” but said women “should not allow themselves to become victims”.

The post sparked criticism on social media, with the government accused of victim-blaming. 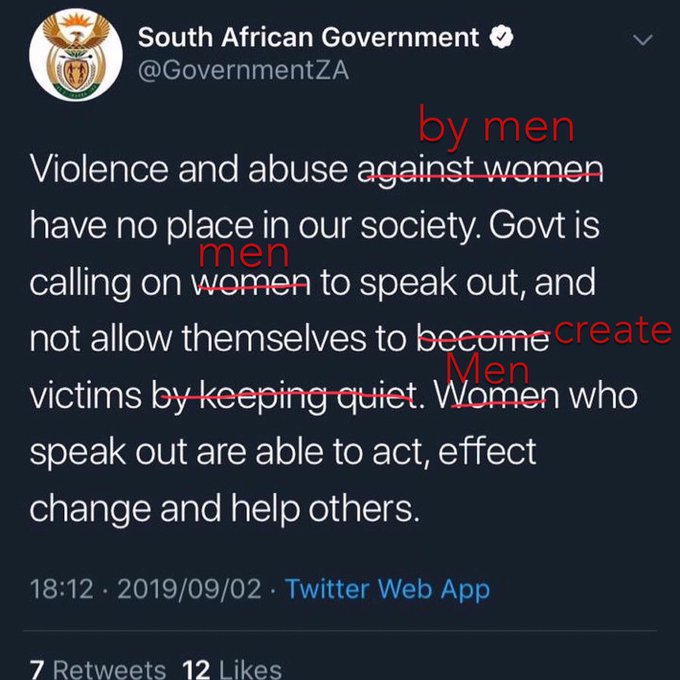 1,849 people are talking about this

“I am struggling to understand the phrasing of this statement. These survivors were not victims because they didn’t speak out. They were victims because their human rights were violated. Femicide in South Africa is a crime against humanity,” one user wrote in response.

“Victims couldn’t speak out because their lives were lost!” another said.

“Enough of this nonsense making men’s crimes a woman’s responsibility,” tweeted a third.

A vigil for Mrwetyana was held at the University of Cape Town on Monday.

We are fully prepared for resumption of academic activities ― NUT, NAPPS