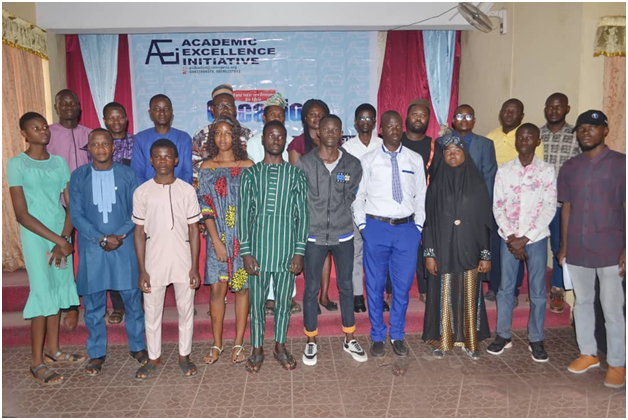 The presentation was made in Ibadan penultimate weekend during the organisation’s annual UTME seminar which featured three guest speakers, Mr Mansur Ismaila, the chief executive officer of Utopian Ideas; Miss Mary Osanyinlusi of the Department of Animal Science, Faculty of Agriculture, University of Ibadan and Mr Yemi Adekunle of the Department of Pharmaceutical Chemistry, Faculty of Pharmacy, University of Ibadan.

The NGO had earlier, in Ibadan and Oyo town, conducted a selection test for 334 candidates who applied for the scheme. Forty-three of them who scored 50 per cent and above were selected for the scholarship.

The project’s coordinator for Ibadan zone, Mr Idris Openiyi, said AEI deemed it fit to organise the UTME seminar to enlighten prospective UTME candidates and present free forms to support some of the candidates.

The topic ‘Facing the Future: Lessons from Intriguing Success Stories’, according to him, was chosen for the candidates so that they could learn from the life experiences of some successful people.

The event was attended by teachers, principals, parents, guardians and students within Ibadan and Oyo town, as well as experts like the founder of Robotics and Artificial Intelligence Nigeria (RAIN), Dr Olusola Ayoola.

One of the guest speakers, Miss Mary Osanyinlusi, urged the youths to discover their potential before choosing a course of study.

In sharing her personal experience, she narrated how she was prevented from studying her course of interest, Animal Science, for three years after she was admitted to the University of Ibadan and how she eventually managed to have her way.

According to Miss Osanyinlusi, she graduated with a First Class in Agriculture and won the university’s scholarship award for her postgraduate study which she finished as the overall best Master’s student in November 2019 with a CGPA of 7.0.

She advised the participants to avoid wasting time seeking admission to universities and polytechnics to study “high-profile” professional courses.

Another speaker, Mr Yemi Adekunle, who is a distinction graduate of Pharmacy, also from the University of Ibadan, described the UTME stage as “a time of trying.”

Adekunle, who also shared his educational grass-to-grace story with the audience, advised admission seekers to push limits by seizing opportunities and deploying their intellectual strengths.

Another speaker, Mr Mansur Ismaila, said poor parental background should not be seen as a hindrance to the pursuit of education and success.

He noted that “a course of study doesn’t determine one’s success in life but rather, the most important thing is one’s passion and the ability to be excellent at what one does.”

The speakers admonished students to strive for excellence and be disciplined in the use of mobile phones.

They advised parents, guardians and teachers to the only guide and not force their children when choosing their academic career paths.