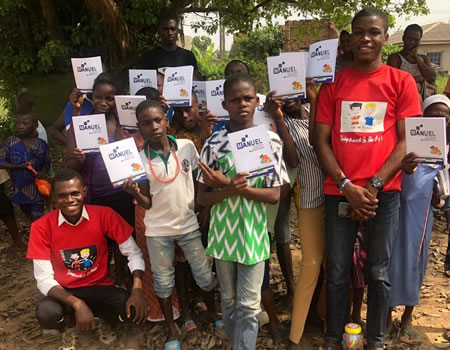 A group, Teen Team Initiative, has concluded a three-day outreach to provide medical assistance, empowerment and donation of food items and educational materials to people of Isefun community in Lagos State.

Teen Team is a non-governmental organisation made up of teenagers who aim to build human capital through transformation, empowerment and enlargement programmes by creating the right network for purposeful life enhancement.

The programme took place between 26th and 28th of December under its community development project titled Giving back to the society (GBS).

The founder, Samuel Ajala, a student of the Federal University Oye Ekiti, stated that the project is aimed at contributing to the development of the society through empowering young people, provision of food and clothing to the needy, and improving the living conditions of the people.

Speaking on behalf of the beneficiaries, Mrs Balikis Jimoh noted that the initiative was a relief to the community which has long suffered neglect.

“What you people have done is good, it shows you remembered some people are still living here,” she said.

“In all the different sections, I was privileged to be part of all, but that the medical check-up part is what I enjoyed most, it shows some people somewhere still care for us” she narrated.

One of the volunteers who also doubles as the Assistant Director of Medical, Omope Kemi resonated the challenges faced by the people of the communities.

“Most of them are not enlightened on how to live a healthy life. Though it may be due to government negligence.

“During the checking of hepatitis B people were scared and even praying that it should not be positive but despite all, we give glory to God because none of them tested positive.

“After checking most of the community leaders, their BP was above normal, but precautions were given to reduce it highness,” she said.

Speaking on what prompted the establishment of the organisation, the Founder of Teen Team, Samuel Ajala, emphasized on the need to reverse communal relations and give back to the society

“As you can see, we have used the network of teenagers to empower the people of Isefun community who have become abandoned due to their location as an outskirt of Lagos State”.

He said the platform was able to provide the people with basic amenities to give the community a sense of belonging.

“We have empowered over 500 people in the community for three days by providing medical checkup, skills acquisition, donation of food items and educational materials and having a one on one session with the children and teenagers to inspire them of the things around them.

“I personally believe that it is not when we advance in age, probably 30 or 50 that we can start impacting our society. We are no longer the leaders of tomorrow but today. If Nigeria will move forward to the next level, we must learn to engage the upcoming generation of ours.”

He, therefore, appealed to the state government and electricity distribution company to provide the community with power supply, noting that its nonavailability has hindered the community from exploiting her potential.

“I want to appeal to Ikeja electricity distribution company to come fix the light of the people of the community because the leaders of the community claimed they have not been having power for the past one year now.”