Group calls for mop up of firearms in Kogi 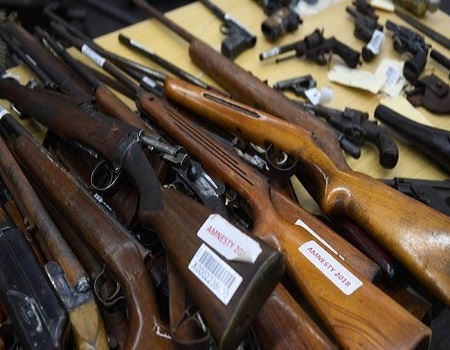 A non-governmental organisation, Search for Common Ground has called for mopping of firearms in Kogi State.

Early Warning Coordinator, Mrs Omolola Mamedu, Search for Common Ground made the call, on Thursday, during the December Conflict Scan Analysis of Post Election Violence with Stakeholders in Kogi State.

Speaking at the occasion she lamented that after the November 16 Governorship election in Kogi State more violence has been recorded across the state.

She lamented that kidnapping, the killing of people and burning of houses have increased in the state stressing that continuous mopping of firearms by the police and relevant security agencies from the possession of thugs and miscreants should be intensified.

Her words, “Weeks after the November 16 Governorship election, Kogi State has recorded some frightening increase in violence in the post-election phase, the aftermath of electoral violence witnessed before and during the election has led to reprisal attacks and the introduction of several incidents ranging from assault, killings, banditry, and kidnapping in the state.

“There is the need for all relevant stakeholders especially the security agencies to beef up security in the state and apprehend miscreants perpetrating these acts of violence.

She also noted that security should be beefed up in those locations recording incidents of post-election violence and also the need to increased patrol and close surveillance by the police and other security agencies along with high volatile areas as well as across the state to forestall peace and lessen tension in the state.

“The security agencies should apprehend all those suspects involved in perpetuating this violence and adequately prosecuted according to the law, this will go a long way to serve as deterrence to others

“Communities should be very vigilant, set up early warning mechanisms and report suspected cases early enough to the police and also the need for continuous post-election engagements in some locations, to ease the tension and conflict created during the election. This would help aggrieved stakeholders to engage in constructive dialogues and seek ways of common grounds to resolve conflict and political differences,” she said.

She stressed that Search for Common Ground is committed to identifying the threat to a peaceful election with the aim of strengthening community-based early warning systems, conflict prevention and mitigation in potential hotspots of election violence, before, during and immediately after the 2019 Kogi Governorship election.