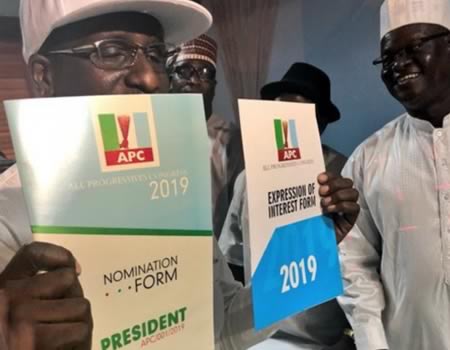 The spokesperson to President Muhammadu Buhari on new media, Bashir Ahmad has revealed that a ‘group of good Nigerians’ has purchased the 45million expression of interest and nomination form for the president.

According to the tweet: “While President @MBuhari is far in China, a group of good Nigerians bought expression of interest form and nomination form for him.”

National President of APC, Adams Oshiomole, received the team of supporters, who went to APC’s headquarter to pick the form on behalf of the President.

President Muhammadu Buhari had earlier complained about the price of the nomination.

It would be recalled that the 2015 presidential nomination form was purchased for the president after he claimed to be unable to afford it.

APC chieftain in Benin dumps APC for PDP, places curse on anyone who goes back to APC