Greenfield University kidnap: It’s been one month of horror, hell 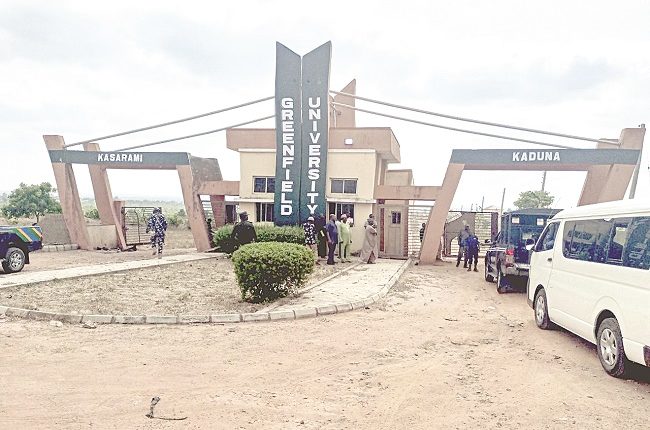 AT exactly 8:15 pm, April 20, 2021, the ruinous ring of kidnapping for ransom extended its orbit of terror when at least 23 students and staff were kidnapped in Kasarami village, Chikun Local Government Area of Kaduna State, during an attack by suspected armed bandits at Greenfield University. Both local and international social media platforms went berserk, detailing and condemning the kidnap, with police authorities confirming the abduction, saying that suspected armed bandits infiltrated the institution in large numbers and abducted the students while killing one member of staff. Outrageously, the abductors had informed both government and parents of their abductees that they would collect N800 million as a ransom for the release of their captives.

Grief-stricken by the realisation of the possibility of losing their children and loved ones forever, parents and family members of the abductees vented their financial handicap of raising such amount to secure the release of their children and loved ones. As they moved from television screens to pages of the newspapers, social media platforms and radios, the parents cut a very pathetic sight. Their fear and distress worsened when on April 23, exactly three days after the abduction, the kidnappers killed three students in their captivity. The bodies of the dead students were found in Kwanan Bature village, a location close to the university. Not relenting in their viciousness, the kidnappers killed two more kidnapped students of the university on April 26, exactly three days later.

A leader of the bandits’ group, Sani Idris Jalingo, who spoke to the Hausa Service of the Voice of America (VOA), demanded a ransom of N100 million and ten Honda motorcycles, insisting that if the ransom demanded were not provided, trucks would be used to evacuate the lifeless bodies of the remaining students. Two of the abducted students who spoke during the interview also appealed to the government and their parents to take the threats seriously.

One of the students identified as a grandchild of the late 18th Emir of Zazzau, Shehu Idris, called on the government to negotiate with their captors. “They mean what they say because they have already killed some of us,” said the student simply identified as Idris.

Similarly, Abigail Usman, another student, also pleaded with the government to send the money so that they can regain freedom. She said the five students killed were taken in their presence to where they were murdered. “If they don’t get the money, they will kill us all,” she pleaded.

On May 1, one of the abducted students was released by the bandits after his parents had paid an undisclosed ransom.

Nigeria’s North has witnessed a rash of abductions of students particularly in the last six months, with the Greenfield calamity still persisting. On the evening of December 11, 2020, over 300 students from a boys secondary boarding school on the outskirts of Kankara, Katsina State, were kidnapped. This kidnap was appalling; for more than one hour, a gang of gunmen on motorcycles reportedly attacked the Government Science Secondary School, where over 800 students resided. After spending six days in their captives’ lair, the kidnapped students, numbering 344 were reportedly freed from where they were being held in a wood in neighboring Zamfara State.

Still reeling from this episode, a school pupil was killed and 27 others abducted by gunmen from their school in Kagara, Niger State on February 17, 2021. Three members of the school’s staff and their relatives, numbering 12, were also abducted alongside the students. Ten days after their ordeal, the Niger State government announced that all the abductees had been released.

A month after the Kagara kidnap, precisely on March 11, 2021, armed gunmen attacked Federal College of Forestry Mechanization, Afaka, Igabi Local Government Area of Kaduna State, kidnapping 39 students. While 10 of the students were released at an interval, the remaining 29 were released on May 5, 2021, after spending 55 days with their captors.

However, it has been more than a month since the abduction of the Greenfield students with no ray of hope of freedom on the horizon.  President of the National Association of Parents/Teachers Association of Nigeria (NAPTAN),  Haruna Danjuma, joined his voice to that of the affected parents in appealing for the release of the students. According to him, “begging them became mandatory because we want all our university students back home alive. We were shocked and not happy with that statement on the radio that all our remaining Greenfield students would be killed if N100 million and 10 Honda motorcycles are not given to them. We are simply begging them not to kill any other student in view of the fact that they are innocent.”

He was reported to have reiterated the parents’ union’s initial call that the same strategy adopted to rescue the kidnapped students in Jangebe, Zamfara State, Kankara in Katsina State, Kagara in Niger State and Afaka in Kaduna State should be adopted by the Federal Government to rescue their children too.

“The kidnappers have not shifted ground, they are demanding N10 million for each of the 16 captives, even after the parents had collectively paid them over N60 million ransom for the release of their children without any success. We the parents are appealing to the federal and state governments to assist us to pay the ransom demanded or find any other way to ensure the safe return of our children,” he said.

The remarks credited to Sheikh Gumi, during an interview, appear to have dimmed the possibility of any immediate release of the students. In the interview, Gumi said unlike previous cases of abduction in the North-West and North-Central states, the kidnappers of the university students have linkage with some elements of Boko Haram in the forest.

“The Greenfield abduction is unique because for the first time we saw a cooperation between some bandits and Boko Haram elements which confirm that Boko Haram are encroaching into the field, which is a bad situation,” he stated.

The cloud of trauma which has enveloped the parents and loved ones of the abductees can only be imagined. The physical horror and psychological torture which have become the lot of the kidnapped Greenfield students, more than a month after their abduction, should reignite the waning public protest for their release and jolt the relevant authorities in securing the students’ freedom.

In spite of the huge investment in the water sector by the government and international organisations, water scarcity has grown to become a perennial nightmare for residents of Abeokuta, the Ogun State capital. This report x-rays the lives and experiences of residents in getting clean, potable and affordable water amidst the surge of COVID-19 cases in the state…Greenfield University kidnap  Greenfield University kidnap

A positive moment for Nigerian footballers

At sixth Atanda conference, Falola, others seek devolution of power

With Oyo’s resettlement centre, beggars get new lease on life