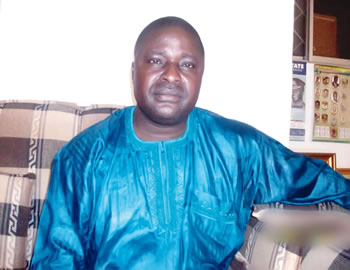 The alleged donation of 55, 000 hectares of land for grazing reserve in Plateau State has been generating controversy. In these interviews with ISAAC SHOBAYO, a former member of the House of Representatives, Honourable Simon Mwadkwon,  a body established recently to sustain the peace on the Plateau, speak on the controversy.

THE alleged donation of 55,000 hectares of land for grazing reserve in Plateau State has ignited controversy and sparked protests. How do you see the brouhaha over the issue?

When I was a member of the House of Representatives, the bill did not succeed during our time despite efforts by some people to force it through. For me, I saw it coming from the wrong direction. If you look at it critically, it is the government crying more than the Fulanis; it is the government that is trying to force it on the people. It is just like the Jaiz bank, the former CBN governor, Sanusi Lamido Sanusi, was the one propagating the idea then, trying to convince people of its importance. He even came to the floor of the House of Representatives to discuss the issue with us. Then, we expected that the hierarchy of the Islamic body in Nigeria will be the one in the forefront but we had the governor of CBN trying to convince the people. If you look at the grazing reserve issue, you will find out that it is the government that is trying to force it on the people. The Fulani has never been so vocal about it like the Federal Government is doing and also at the state level. For the Plateau State government to wake up one day and say they have donated 55,000 hectares of land for grazing reserve is very unfortunate. Where did the government derive such power to make the statement? Who did they meet before making the statement?

From all indications, the grazing reserve is against the people, it is not the people that are against the grazing reserve. Why is it against the people? If two people are in dispute over a piece of land, by the time you take that disputed land and give it to one person, you have not solved the problem. The Fulani traditionally earn their living through keeping of cattle; the farmers also earn their living by cultivating their lands. There are farmers that have just a piece of land, now you want to take that piece of land from that farmer; saying you are giving it out for grazing reserve. Once it is implemented, farmers no longer have access, even to cut down trees on the land. Any encroachment attracts a fine of N50,000. If you take that land and give it to a Fulani for grazing reserve, how do you want that farmer to survive? No matter the amount of money you give him, if he cannot get another land, how do you want him to sustain his family members? I see the government trying to introduce anarchy to the whole system. A hungry man is an angry man; a person without of livelihood would not mind killing to survive. So what are the measures that the government has put in place? We are Africans and the position of our culture and traditions is very clear on land matters. You must belong to a place; that is why the constitution of Nigeria makes it clear regarding the appointment of a minister; that a minister shall be an indigene of a particular state. It means the herdsmen must have their own places of origin. Can a farmer from Plateau or Benue State go to Fulani’s place and say give me land for cultivation and nobody should graze here again? What we see is that there is an attempt to annihilate the minority of northern Nigeria and the government doesn’t seem to protect the right of the minority. Fulanis are everywhere and they have another place to run to if there is commotion; what about the Plateau person who has nowhere to go?

So we have said it several times that the bill is not people-friendly, it cannot foster peace. It is an attempt to annihilate and bring some people to extinction; it is also an attempt to introduce hunger and poverty. Some people look at it from the religious perspective, I also subscribe to that, people are suspicious and they are thinking that long before now, there has been an agitation or attempt to Islamise the country. They have tried by all means and it had failed, perhaps this is another attempt to use government machinery to achieve this purpose.

But the argument in certain quarters is that it is not a grazing reserve per se but ranching and that it has some benefits and advantages for land owners and the host community. For this reason, some governors are encouraging their people to take advantage of it as another way empowerment. What do you think?

I don’t know what the economic benefits or the advantages are; the cattle belong to individuals, not even the community. For example, the Fulani residents in Riyom, if they see foreign Fulani men coming to settle among them, they would fight them. Why are they doing so? They should have accepted everybody; but they will fight to protect their cattle. If there are economic benefits, they are for individual families. And mind you, why would you want to empower a certain set of people? Are we fostering unity? In what way does grazing reserve benefit the farmers? I don’t see any benefit in it, rather they want to improvise the farmers by taking their land and giving it to another person.

The government said the land will not be taken by force and that anyone whose land is taken will get a handsome compensation.

I don’t know the detail of the compensation they want to give; is it in monetary term? What are the long term effects?  Now, assuming they take your land of about 10 hectares of land and they are giving you N1 million, how long will the money last? But land is not transferable; it is constant, you can increase the fertility of your land if you want to get high yield, the farmer too can keep cattle. What the proponents of grazing reserve seem to have forgotten is that anybody can keep cattle. It would have been better if the government had carried out research on how it is being done in civilised society before dabbling into it.

What is your advice to the Plateau State government now that the issue is generating controversy?

Grazing controversy: Plateau keyed into idea of ranch because of its economic…