Interview
By STEPHEN GBADAMOSI On Jul 5, 2020 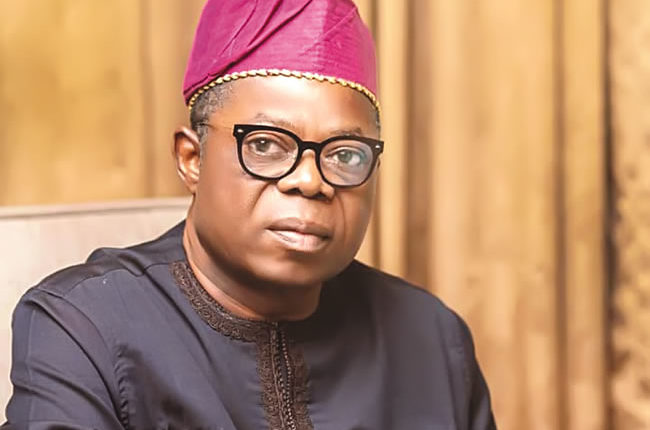 Chief Olayide Adelami, a former deputy clerk of the National Assembly, is a governorship aspirant on the platform of the All Progressives Congress (APC) in Ondo State. In this interview by STEPHEN GBADAMOSI, he speaks on his ambition and plans for the state, among other issues.

HOW would you describe your time as the former Deputy Clerk of the National Assembly and what would you consider your greatest legacy?

It was a good experience. You will agree with me that National Assembly is the hub of Nigerian politics. It is an institution that has truly impacted my life, because everything in the National Assembly is about the security and welfare of the people. That is where I received most of my trainings. It was a good learning ground for me. In terms of the legacy I left behind, I am bold to say it is good name. I left a good name and I made a lot of positive impacts in the lives of the people.

As an institution itself, I started as an accountant in Finance Department. I rose to become director of finance and as a people-oriented person, I made sure all my staff were developed. Even when I moved to Procurement Department, I encouraged Human Resources development. Almost one-third of my staff became qualified procurement officers before I left. That singular act earned me an honorary fellow of the Nigerian Institute of Purchasing and Supplies. I encouraged trainings. I believe in their career advancement. I ensured that the entire staff of the directorate were trained locally, while Level 10 and above of my staff were also exposed to international training in addition to the local trainings.

Your critics based their criticisms on the fact that you have not been active politically before now.  How prepared are you for the top job?

As I told you, the National Assembly is like a school, a learning ground where my political ideals were incubated. I am also a community person and my people can attest to that.

So, charity begins from home. I have done much for my community and its environs and I want to extend the gestures to other parts of Ondo State. Governance is about the people. We have to harness the resources of the state to impact and transform the state.

The incumbent governor is from Owo and Ondo people will be thinking that Chief Adelami is also coming from Owo. What are you bringing on-board to encourage Ondo people to accept and support you?

Unfortunately, this question comes often and often. My common answer is that governance in the state is not about Owo alone. Owo is just a local government out of 18. It is about righting the wrong and bringing out the best for the good of the people.

Although, I would like my prognosis to be issue-based, but let me say, without dragging anyone in the mud, that what we have seen so far in the state has not reflected the yearnings of the people. I, honestly, would not like to dwell much on personalities. I would rather want to talk about our political party. You know without the party, there cannot be governor. Party makes you the governor and you work against the party and you also work against the people that worked for you. So, why are you there? My coming into governance is going to be corrective in terms of developing the people, relationship with the people and party men. I am coming to achieve party cohesion. I am coming to make the All Progressives Congress (APC) stronger than any other party in the state. And I am coming for real and sustainable development.

The focus of the current government is just the rehabilitation of selected city roads. The rural roads are not touched. The projects are not really benefitting our teaming unemployed youths and people at the grassroots. The city roads have little or no synergetic effects on sustainable development in the state. I will rather prioritise the development of the rural roads spiced with urban renewal. Of what essence are the city roads that do not bring food to the table?

You talked about the party; right now, the grouse within the APC faithful in Ondo State is that they are so much disheartened with the present situation. Now, Ondo people need a bridge builder. Do you see yourself as one?

I am, indeed, a bridge builder of repute. As I have said earlier, I have used all my previous positions to unite people, impact their lives and create opportunities for them to excel. By the special grace of God, this is one of the inbuilt attributes I am bringing on board. By the time we commence governance through the mandate of the people, and by the grace of God, the state will witness a new era of development and party cohesion. It is going to be a new era and I am prepared to make my mark within a single term of four years.

Are you saying you won’t spend more than one term in office if voted in as the next Governor of Ondo State?

I honestly believe that a single term of four years is enough for me to touch the lives of my people and leave the stage for another credible person. Besides, Ondo State was, at a time, a one-term state, rotating from one senatorial district to another. Olusegun Agagu broke the jinx. He spent one term and the people gave him another, but midway to accomplishing his second term, the court terminated it. It was not the people who terminated it. It was the court on technical grounds. Then, Dr. Olusegun Mimiko from the Central Senatorial District came on board and spent two terms of eight years.

It is now the turn of the North Senatorial Zone for eight years.

At such a time as this… acquire knowledge (i)