Property and Environment
By Chukwuma Okparaocha-Lagos On Jul 5, 2016 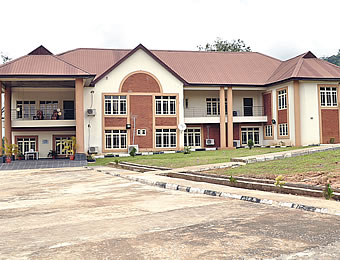 An housing expert and chief executive officer of M.I. Okoro and Associates, Mr Meckson Okoro, has indicated that despite its huge responsibility in other sectors of the economy, the Federal Government (FG) has the responsibility of bearing over 120 percent of the burden of providing low cost housing in the country.

Mr Okoro made this known recently in a chat with the media, where he further noted that the Minister of Power, Works and Housing, Mr Babatunde Fashola, should carry major stakeholders in the housing sector along if he is to make any meaningful impact in the government’s housing plans in the country.

“It is not about attributing the blame (of massive housing deficit) to government, but yet, it is entirely the responsibility of government to bear over 120 percent of the burden of low cost housing.” He said.

The seasoned real estate consultant, however lamented the gross corruption in the civil service system, a situation he warned could make a mess of any low cost housing project the government might be nursing.

“Even when done, those who work in government parastatals allocate houses to themselves and later sell them at high prices, thus failing to give them to those that they were  meant for. We have an experience with that. Government should therefore ensure such houses (low cost housing units) are indeed built for the people. This is what is done in other countries of the world,” he noted.

He also urged the Minister of Works, Power and Housing to reach out on to other stakeholders in the housing, whose expertise and experience might be useful in solving the housing problems.

“I was thinking that when Fashola, who was an erudite governor for that matter, stepped into office, the first thing he would do would be to invite major stakeholders like estate surveyors and valuers in the industry, including architects, so that we could all chart out a course for effective housing delivery in this country,” he added.

“He is taking a lot of things for granted and I cannot see him making any impact in the ministry. I am not underrating his efficiency but as far as I am concerned, he hasn’t started. As far as housing is concerned, he has not started. When he starts, people like us will know,” he noted.

Govt must not compromise standards during project implementation —Adedire