Governors should not mess up with Amotekun —Olota, Oba Obalanlege 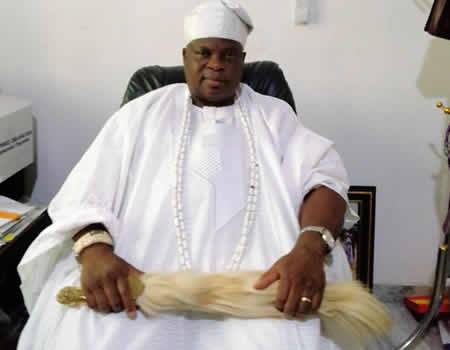 The bill before the Ogun State House of Assembly on review of rites for traditional rulers has ignited controversy in many quarters. The Olota of Ota, Oba AbduKabir Adeyemi Obalanlege, in this interview by TUNDE BUSARI, declared that traditional institutions cannot be threatened. The academic-turned monarch also speaks
on the South-West security network outfit code-named Amotekun Corps. Excerpts:

The bill being discussed at the Ogun State House of Assembly has been subjected to different interpretations, including being a threat to the  traditional institution. What is your view about this bill aimed at altering installation and funeral rites for traditional rulers?

It is interesting to note that the bill has triggered public debate. Of course, reactions should be expected by the lawmakers too because it is an issue which touches  the fundamental of a culture. But, having said that, I don’t see it undermining traditional institution in any remarkable way. I have read a couple of comments which raises some fears, but I am repeating it that our tradition is too deep rooted to be wished away just like that. I think it is good to shed some light to the issue involved in traditional rites. The truth is that the public cannot have access to some of these rites we are talking about. This is not saying that the rites are done in secrecy. Rites don’t perform themselves. A group performs them. But once custom and tradition say some things are not for public consumption, that remains sacrosanct. I need to clarify that performing the rites in private does not suggest the rites are bad.

Why do you sound so confident when others are scared?

There is nothing to be scared of if one understands what the bill is all about. I think I have appreciable understanding of what the bill is out to achieve. The truth is that I am not under any pressure about it because I know that our culture is our identity which cannot be taken away from us. I was saying that there are ways traditional rulers’ funeral is performed without drawing much public attention. This bill cannot alter this in true sense, and I know what I mean.

I am telling you that our tradition is rich, and cannot be compromised because it is our heritage.  Again, there is no reason to panic about it. We have Islam, Christianity and traditional religions. But if you see the way the three religions interconnect, you would be shocked. Whom do you think are inside masquerade costume? Go and do you finding as a reporter to know how strong our tradition is. Yesterday, we did divinity in the town, a sorts of spiritual cleansing of the town. I am not part of the people who perform it but I am in the best position to give directive to those who are assigned traditionally to perform it. Does that make me a pagan? Who is even a pagan? Honestly, it is high time we got something clear. We should know the difference between faith and our traditional practice. Islam and Christianity were originated from the Middle East. The missionaries’ brought Christianity while the Arabs brought Islam. Yet, they met our culture being practised.

What can you say precipitated the bill?

Does that matter? I don’t think I need to investigate. I am not a member of the House of Assembly to have a clue of what transpired before the idea of bill came up. Again, I am saying that the bill would not erode the influence of our tradition. However, I am an advocate of opening up our culture to the movement of the world. We cannot afford to be stagnant when others are on motion. What I am saying is that there is need to modernise. We are in a global village and a dynamic world. Things are changing at a fast rate. There is no way western influence, for instance, would not interfere with what we have here. Our culture is also being accepted in western countries. But important aspects of our culture should be preserved because they are our heritage which was passed down to us by previous generations.

Amotekun bill has been passed into law in Oyo State, and other South West states are waiting to also sign it. What is your position on this development?

My position on it is very clear. I am optimistic about that new security initiative aimed at improving security of life and property in Yoruba land. I want to believe you know that insecurity in Yoruba land is more or less a serious threat to the country at large, considering the strategic role we play to other ethnic groups. For instance, my town here has always experienced the effect of overflow from Lagos. I can even say that 80 percent of Lagos workforce is resident in Ota here. And when you analyse this percentage, you realise that all ethnic groups in Nigeria are represented. What does this mean in terms of security? It means that if insecurity forces these people back to their different states, those states would not be able to contain the pressure on their economy.

ALSO READ: 2023: The PDP Challenge To The APC In South-West

In other words, you are favourably disposed to Amotekun security outfit?

Why won’t I? Or why won’t any traditional ruler who genuinely desires development in his domain? Amotekun is a welcome development which everyone should be given enough support to succeed, for its failure would mean a lot to whatever we dream to have, in terms of growth and development. Where there is no peace, no development will take place.

Don’t you think traditional rulers need to be given roles to play in it?

As far as I am concerned, I am aware of the development. Already, we are well positioned as traditional rulers, as father of all. We cannot be running about but we are abreast of the development. To some extent, it is our initiative in our effort in search of solution to insecurity problems. We can say we don’t know much about the police which is under the federal government but Amotekun is ours, and we have to support it to succeed.

Don’t you see it being abused when it comes into full operation?

I don’t want to pre-empt such now. It is too early. All we should see is the positive side of it. If we begin to see the other side, it is dangerous. Those that will be in charge of it should do as much as possible to ensure transparency and strictness, especially during recruitment process. Traditional rulers can be consulted in this regard because we know our people. We know those to recommend based on track record and those to leave out in order to save the outfit from infiltration. Amotekun is a picture of how state police would look like. That is why our state governors should do everything to do it right from the start. They should not mess up with it. They should see the acceptance the Amotekun has received so far as something to build upon. With due respect to the police, the enthusiasm which our people have shown is an assurance of their confidence and hope in it.

The state of Abeokuta-Lagos expressway remains a serious headache to travellers. Are you worried about it?

Why won’t I be worried, knowing the significance of that road to socio-economic development of this area? I can tell you that I am disappointed in the Minister of Works who decides to allow that road to degenerate. But, Julius Berger is back on it now. Unfortunately, the construction is ill-timed. Rainy season is almost here. How much of work would they do before rain comes in full. But that the construction company is mobilised means there is a sign that the road would be fixed. A serious country would not allow a road as this to collapse as it is now. But I am confident that old days are coming back, and users of the road would smile again.

PEFTI: Why we are different from others —Wale Adenuga