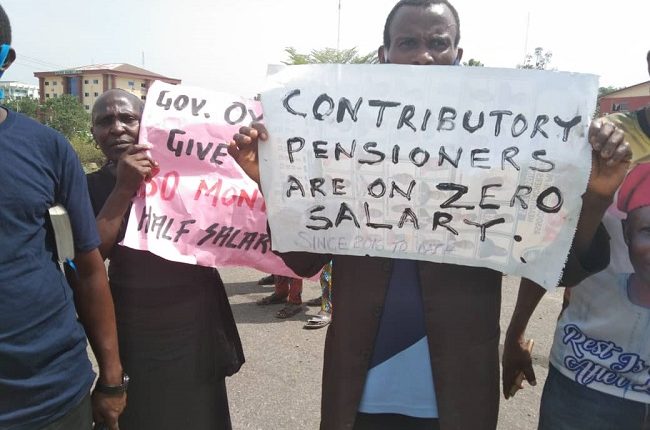 The Association of Senior Civil Servants of Nigeria (ASCSN) has described the plan by the governors to borrow from the Contributory Pension Funds as a scheme by state governors to siphon N17trillion pension money.

In a statement issued on Monday titled: “Labour Condemns Plans by Governors to Borrow ₦17Trillion Pension Funds,” the union said it condemned “the plans by the 36 state governors to siphon ₦17 trillion from workers’ pension funds.”

In the statement signed by the ASCSN Secretary-General, Comrade Alade Bashir Lawal, the ASCSN regretted that the governors, “some of whom their  states have not contributed a dime to the pension funds were now desperate to collect ₦17 trillion out of it to massage their insatiable greed.”

The Union, therefore, urged the National Pension Commission (PenCom) not to release any money from the pension funds to the governors under the guise of loan.

It warned PenCom that if they do, they should be ready to face the wrath of millions of Nigerian workers.

Citing available data and information from PenCom, the union said as at June 2020 only four states across the federation and the Federal Capital Territory had reasonable level of compliance in pension fund contributions.

It said: “Although 25 states have issued legislation on contributory Pension Scheme, only four states namely Osun, Lagos, Delta, and Kaduna are in high compliance of remittance to PenCom.

“In stated that have pension schemes, retirees are not paid their benefits two to six years after exiting service.”

The ASCSN wondered what rate of interest would be paid on the loan, how would the loan be recovered, and what collateral would be provided.

It expressed worry that governors, some of whom collect about ₦1 billion monthly as security votes could not plough such funds into infrastructural development but instead were insisting on liquidating pension funds of workers they have denied any meaningful dividend of democracy over the years.

“Besides, there are so many untapped natural resources in the States that the Governors can harness to generate funds for development instead of looking everywhere for free money to appropriate and divert for private purposes.

“But the governors should be told that the pension funds are not idle or free money but are funds meant to pay employees their retirement benefits after serving their employers for years,” the ASCSN emphasized.

Lost Your Job In The Pandemic? Here’s How You Can Make Money Using Your Talents…