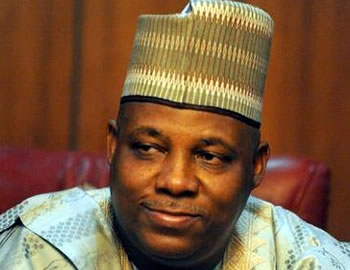 GOVERNOR Kashim Shettima on Tuesday cancelled his Government’s plan to return most of the Internally Displaced Persons to their homes in Bama before may 29th as planned.

The Governor who had relocated to Bama temporarily for at least a week last year had launched an aggressive reconstruction of private homes and public buildings destroyed by Boko Haram during their nearly two years occupation from 2013 to 2015 with a target of returning IDP’s to the town before May 29, 2017.

But he had to reverse his decision when it was obvious there was more work to be done in the second largest town in the state and that the military were yet to give the h o ahead that farmers will not be slaughtered if they strayed to their farms in the outskirts of the town.

Shettima announced the change in Bama town while commissioning 12 public infrastructures rebuilt with N360m by the Borno State Government and funded by the Victims Support Fund.

The fund established in 2014 under the chairmanship of General Theophilus Danjuma after a Presidential fund raising that generated donations from the public and private sectors have been a saving grace to the state.

Shetima noted that “Our goal was for our people to be able to return to Bama before this Ramadan. Unfortunately, this is not feasible because the military is still carrying out operations in some areas around the Sambisa as part of mop up exercise in the yet to be concluded fight against Boko Haram.

“We will continue to work with security agencies to review situations. Our number one priority is the security and safety of our people. We will not allow any IDP return to any community that we had not regained 100% safety. When IDP’S return to their communities, they would still need to go to their farms, markets and to travel for economic and social purposes. We must be sure that farms are safe and routes are safe before we allow our people to return.

“But even while we do the reviews, we will continue with our aggressive reconstruction works. We will not wait till eternity. We are very optimistic that very soon, the entire Borno will be safe enough for full habitation. We look forward to Borno reclaiming peace, security and progress.”

Shettima also explained that “For the purpose of setting records straight, I think I should use this opportunity, to once again explain, that we are sharing our focus on all parts of Borno State not just on Bama. Our reconstruction works actually started in northern Borno where we rebuilt numerous public and private infrastructures in Kaga local government area.

“We are currently working in 14 Local Government Areas but yes there is a special emphasis on Bama, Mobbar and Gwoza. Bama has the highest attention because going by the Post Insurgency Recovery and Peace Building Assessment Report jointly conducted on the Northeast by the World Bank, the European Union, the Presidency and State Government in the northeast, Bama has been adjudged the worst destroyed by the Boko Haram. More than 80% of public and private infrastructures were destroyed by Boko Haram during their occupation.

“The Boko Haram as we all know, also occupied Gwoza but they didn’t destroy Gwoza as much as they destroyed Bama. So, our idea of facing Bama is to confront the most difficult challenge in a bold manner so that our task becomes less. Next to Bama in terms of massive destruction is Mobbar. We are currently working in Mobbar. We have deployed so much resources so that we also confront the rebuilding process.”

In his remarks, Danjuma, represented by Vice Chairman of the VSF, Tijjani Tumsah said the VSF decided to make intervention in Bama because the fund was impressed that while it provided N250m for reconstruction of 24 projects in Dikwa last year, the Borno State Government used the same funds to rebuild not only the 24 projects but added 16 others.

Executive Director of the VSF, Professor Sunday Ochoche also commended the Borno Government for what he described as “very efficient and highly productive use of resources” in all its partnership with the Government. Ochoche announced that the fund will soon begin rehabilitation of 16 schools in other parts of the State as part of its continued intervention.

The Shehu of Bama, Alhaji Kyari Ibrahim Elkanemi who was at the commissioning thanked the Federal and Borno Government for standing by the people of Bama.

At least five local government areas would have been repopulated with returnees if this plan had worked out against may 29.