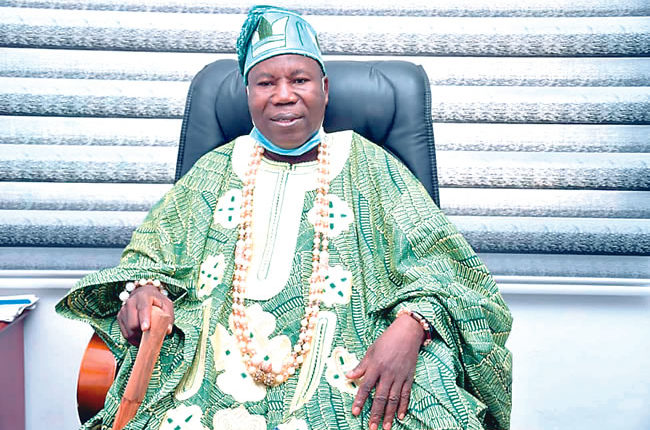 Your town has one of the tourists attraction in Nigeria, has this helped development?

Yes, we have the Iyake Lake in my community; it is the only natural suspended lake in the world. America also has a suspended lake but it is man-made, not natural like our own. The lake has helped attract attention to my community but the potential is not being maximally utilised. I want to appeal to the government to invest in this tourist attraction because aside being a tourism destination, it is also our cultural heritage.  I am aware that there is an agenda towards developing the site especially the mountain but I want to encourage the government and the people of Oyo state to see the need to develop our tourism potential, not only in Ado Awaye but across the length and breadth of the state. This is a major thing that we lack in Oyo state; we do not focus on our potential in the area of tourism. For instance, why will we have the only natural suspended lake in the world in my town and it will still be in that level in terms of development. We are grateful to the present government because efforts are being made and are at top gear to see that the suspended lake is developed into a tourist destination that will improve the economy of our country, provide employment for our youths and increase government’s income. I want to encourage locals to support the government so that this vision will be realised during this dispensation.

Aside the tourist attraction, has the present government done anything in your community?

We thank God. Life is about destiny. God has brought the present administration into power for a reason and since they came on board, they have shown commitment to tackling our challenge. The major problem we have in Oke Ogun is road and presently, the governor has taken our road as a priority and as we talk, the road that will link Ijaiye to Oke Ogun is almost done. Not that alone, Oke Ogun is the food basket of Oyo state, leading from Iseyin to Saki, from Iseyin to Okaka is motorable but beyond is bad especially within Saki town and the governor has pledged that the road that cuts across Saki would be taken care of in due course

What is the situation of farmer and herdsmen clashes and general insecurity attributed to bad roads in Oke Ogun axis?

That is one challenge that still requires attention and we want to call the government’s attention to it. We are really facing the challenge of herdsmen attacking our farmers and the problem of kidnapping. We know the government is doing much but we still want to implore him to do more so that the security of Oke Ogun people will be assured because majority of us are farmers and there are threats to our farmers on their way to the farm and even when they are on the farm or going back home in the evening. So we want government to do more for us to eradicate the constant threat to the lives of our people by herdsmen.

A mobile police squadron was recently commissioned at Ago Are by government to take care of Oke Ogun axis, has it made a difference, and if yes, in what way?

Yes, they have been doing their best by going around communities, they visited my community too but the cases of kidnapping are still a serious issue that require more attention. I think this alone is not going to be sufficient to curb the issue, though we appreciate government’s efforts so far.

In security issues, while government has a huge role to play, the people also have a part to play. How has the community helped government especially in terms of information?

The Vigilante Group (VGN), local hunters and the palace security team have been meeting and are working in collaboration with the Anti Kidnappers Squad (AKS) and they have been moving from one village to the other to ensure security. Work is ongoing and the community is cooperating with the government effectively. We are playing our part and government is playing its part, we are only praying that these two efforts combined will be effective enough to arrest the situation on ground

I will say two things, I was at Saki few weeks ago when the governor came to commission the isolation centre, but the people clamoured that rather than the isolation centre, they wanted a specialist hospital and the king also made requests concerning the bad condition of the road which had been like that for a very long time. And when the governor was going to respond, he acceded to the cry of the people, this is a proof that he is a listening governor. And from my own experience in regards to issues in my community, I can say he is interested in the welfare of the people at the grassroots; we have been in the dark for three years in my community and when he came, we made our requests and recently, two new transformers have been domiciled in our community waiting for installation.

As someone that advocates that people play a part in supporting government, how have you impacted your community?

Well, it is true that I think we should not be leaving everything to government. Therefore, I had been doing the little I can in my community; when the Covid-19 pandemic came, the Commissioner for Information and his team visited Oke Ogun and distributed few face masks. At their departure, I sat down because the 20 they gave us cannot go round, so I customized face masks which were distributed in August during my third year anniversary. I made 5000 pieces and we distributed to the whole community. We also spoke with some of our children in the Diaspora and they sent relief packages which we distributed to the people in the community as a way of supporting government’s efforts.

What advice do you have for your people?

Like I said earlier, life is about destiny, we just want to encourage the people to cooperate with the government so that they can encourage them to do more and fulfill their vision of taking Oyo State to her place of destiny as God has given to them.