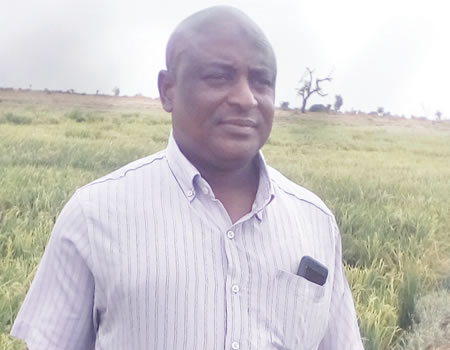 Navy Captain Abubakar El-Yakubu {RTD}, is a retired naval officer based in Argungu, Kebbi State. He is currently into farming. In this interview by OLAKUNLE MARUF, he speaks on what is expected of government to make agriculture more attractive to Nigerians.

Successive government in Nigeria have always made agriculture a priority but little was achieved. Where have we got it wrong?

To the best of my knowledge, the main reason governments are getting it wrong is that they are not supporting the real farmers. Imagine the little or any form of assistance we get from government always comes late.

It will interest you to know that as of today, government is not subsidising fertilisers for farmers, no provision for improved seedlings from government to farmers among others. If we are to start mentioning where and where the government has failed Nigerian farmers, they are too many to explain.

Yes, it is suitable if the issue can be addressed holistically. The government must correct issue of lateness of assistance to the farmers. The current federal scheme is doing well, many people have engaged themselves in farming due to the government policy. People believe so much in the policy as announced by the Federal Government but still want them to match it up with monitoring and discipline. Some officials especially at state level are deliberately frustrating the efforts of government for their selfish gains. The government should have a monitoring team who will interact with the real farmers and not portfolio farmers they usually deal with.

What do you think is responsible for the decline in agricultural production in Nigeria?

The decline in agricultural production can easily be traced to lack of funds. If  prospective farmers have or can get access to enough funds, they will be able to cultivate as much as they wish. People don’t have access to cash and the government is not helping matters. Let government monitor how the loan earmarked for farmers can be accessed directly by the farmers and not somebody else. The Federal Government should stop the involvement of state government in the disbursement of loans to farmers.

The state governments have a way of short-changing farmers by diverting the resources meant for farmers to their personal or friends use. If Federal Government can work to block the loopholes, definitely more people will be interested in farming in the country.

How can our teeming unemployed youths be encouraged to embrace farming?

Both the Federal Government and the states have to be involved. The first thing I think should be done is to assure them of government support, after which the government will organise a training for them on the type of farming to engage. The government can thereafter organise a loan scheme for them to start farming on a good note. Though, it is going to be difficult to advise a university graduate to embrace farming, however, you must be ready to assure him of assistance by government both in terms of farming and the selling of the produce after harvesting.

What do you think can be done to discourage importation of agricultural produce, and encourage exportation of such produce in Nigeria?

The current government plan can discourage importation if the said government can be of assistance. Take for instance, before the introduction of this policy by the present administration of President Mohammadu Buhari, the Fadama farmers here were just around 40 per cent then. I am telling you now authoritatively that Fadama farmers in Argungu have grown up to 90 percent as of today. Imagine if the real farmers are feeling the impact of government on their farming, definitely things would be better than they are now. The reason we cannot export our farm produce for now is because of limited produce we harvested. If the Federal Government through the Ministry of Agriculture can find a way of collating the data of the farmers in Nigeria, I can assure you that both the government and the farmers will have a good testimony to give afterwards. My sincere advice to the Federal Government is to look for a means whereby the real and authentic farmers will be identified. We the real farmers are using this opportunity to appeal to the Federal Government to do the needful. The Federal Government should stop dealing with us through the state government, we need to be recognised directly from the centre. There is a farmers association which the Federal Government can use to get to the authentic farmers in Nigeria. All we are saying is enough of political or briefcase farmers, who only use our names to get fertilizers, equipment subsidy or monetary assistance from Federal Government and never cultivate any farm.

How can the government at all levels create big markets for agricultural produce within and outside Nigeria?

Both the federal and state governments should try and find a way to assist farmers by buying the farm produce directly from them. Not all the farmers have the means to take their farm produce to the market, but with government support, it is achievable. If the government can come in and assist the farmers in this regards, it will not only help the farmers alone but also assist the general public.

You can imagine how it will help in regulating the price at which farmers will be happy as well as the public.

On the issue of exportation, the government can help in buying from the farmers. Here, it will be easy for the Federal Government at least to package such produce for exportation at a reasonable or profitable price. Certain factors have been identified to be hampering agriculture in Nigeria, such as lack of farm inputs, loan facilities to the farmers among others.

How can we overcome these problems in the country?

Yes, I believe these problems are already known to the government, at least the Federal Government and I believe it is the reason they make a provision of giving loan to the farmers. The problem we usually encountered here is such loans comes out very late.

Now, take for instance, for dry season farming, the best period to access such loan should be the month of December while that of rainy season should also be put into consideration as well.

Can we say agriculture in Nigeria is still primitive in nature? If yes, how can we overcome this and move to mechanized method?

You see, before now we use to get loans for farmers to acquire tractor or government establish a tractor hiring unit in which farmers pay little money to hire a tractor to work for them.

Now if you look around , I don’t think we have any department either at the federal, state or local government doing such in this country again.

There is no farmer in this whole environment with a tractor, farming now is being done manually by the farmers. Let the Federal Government provide mechanised farm implements, I can assure you that Nigeria will be self sufficient in food production.

In a nutshell, the present policy of the government will really assist us in food sufficient if it is well implemented by the authorities concerned.