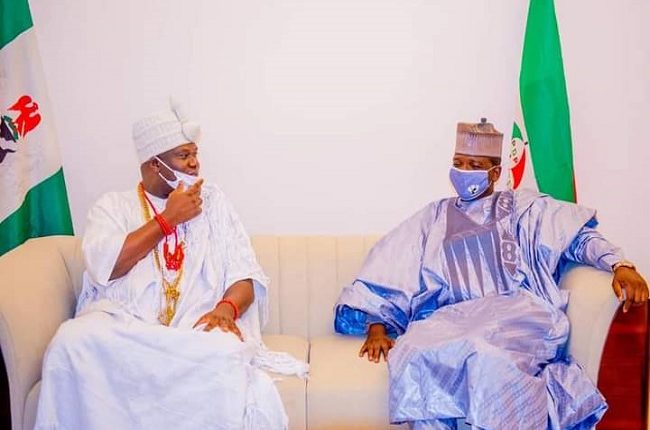 The Ooni of Ife, Adeyeye Enitan Ogunwisi Ojaja 11 has bestowed the title of “Obapero of Ife-Odua” on Governor Bello Mohammed Matawalle of Zamfara state.

The title which literally means”the peacemaker”, will be formally bestowed on the Governor in the next few weeks.

The Ooni announced this award when he paid a courtesy call on the Governor in his house in Abuja on Friday.

He extolled the good virtues of Zamfara gov,  Matawalle as a de-tribalised leader and politician, pointing out that his good intention was responsible for his success in bringing peace to the troubled state he inherited.

He said the quality of Matawalle’s leadership is worth emulating by all Governors in Nigeria because he has not only proved to be an able leader to his people by restoring peace in the state but also a worthy leader to others as he now serves as a bridge-builder across the Niger.

He said the plans of Governor Matawalle to revolutionalise the mining sector in the state is a unique and courageous approach which will turn the fortunes of the country around.

Responding, Governor Bello Mohammed expressed his gratitude to the Monarch for the title bestowed on him and promised to be in Ife very soon to be formally turbaned.

He said that with the new arrangement for the development of the mining sector by his administration, Zamfara state will in the next few months be among the richest states in the Federation.

He promised to continue leading by example and to always put the common man foremost in his heart as he steers the affairs of the state to the end of his tenure.

EDITORIAL: FG’s Gaffe On Amotekun
FOR the umpteenth time, the presidency stirred the hornet’s nest recently. Against the run of logic and the law, it declared that regional security outfits such as Amotekun would be subsumed under the existing policy architecture.  Senior Special Assistant to the President on Media and Publicity, Garba Shehu, featuring… Zamfara

14-yr-old only child of parent, one other feared dead in Warri cult clash