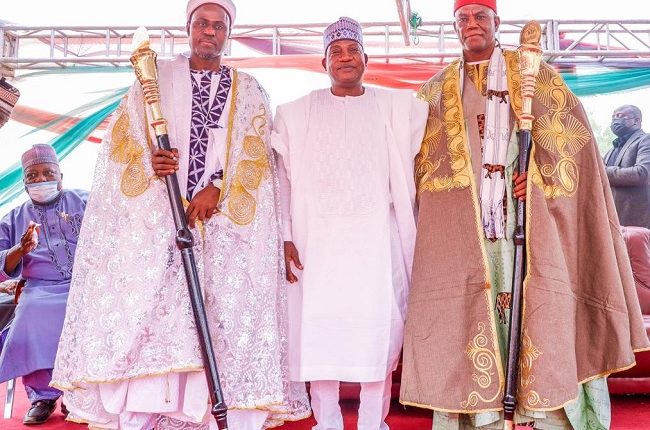 Plateau State Governor Simon Bako Lalong has tasked traditional rulers in the state to take the security of their domain serious threatened that any community leader or traditional ruler who is unable to assist security agencies towards arresting criminals within his domain will be held to account.

Governor Lalong stated this while presenting staff of office to two traditional rulers, Chief Lot Nden, Ponzhi Kadarko Chiefdom and Alh. Muhammad Asi, Aku-Jukun of Mavo Chiefdom in Wase Local Government Area of Plateau State added that as traditional rulers they need to play a greater role in enhancing the security of their domains and the entire nation.

The Governor said the restoration of the two chiefdoms was in fulfilment of his campaign promise and the desire to meet the yearnings of the people in the spirit of equity and justice and charged them to bear in mind the fact that the honour was a huge burden which must be discharged with diligence, honesty, justice and the fear of God.

He said “With the Staffs of Office in your hands, you cease to be champions of one particular clan, tribe, denomination or religion. You are fathers to all that reside in your domains irrespective of where they come from. Always remember that the traditional institution has played and will continue to play a significant role in the peace, unity, progress and security of Plateau State. These are the virtues we expect you to promote and uphold as we consolidate on the peaceful ambience we have worked hard to restore which is bringing back Plateau to its place as the Home of Peace and Tourism.”

Governor Lalong said any community leader or traditional ruler who is unable to assist security agencies in arresting criminals within his domain will be held to account.

“Let me warn that any traditional ruler who is found to be promoting ethno-religious hatred, injustice, disharmony or shielding criminals will not only be dethroned but will be made to face the laws of the land,” he warned.

The two traditional rulers described Governor Lalong as a rescue leader who has fulfilled the dreams of the people that have lingered for many years. They promised to cooperate with the government and support all the programs that are targeted to improving the quality of lives of the people.

Emir of Wase Alhaji Muhammadu Sambo Haruna commended Governor Lalong for keeping to his words and making the dreams of the people in the two Chiefdoms come true.

He assured the Governor that the traditional Council will work together to support the Government in all its programmes.

In spite of the huge investment in the water sector by the government and international organisations, water scarcity has grown to become a perennial nightmare for residents of Abeokuta, the Ogun State capital. This report x-rays the lives and experiences of residents in getting clean, potable and affordable water amidst the surge of COVID-19 cases in the state…Gov Lalong threatens traditional  Gov Lalong threatens traditional