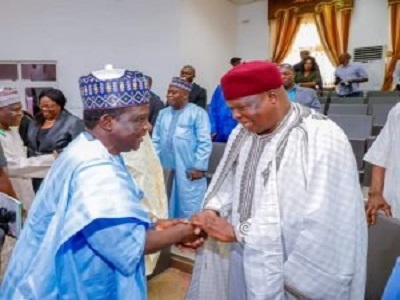 Lalong during the inauguration urged the committee members to evolve new grassroot inclined strategies that would curtail the activities of criminals in the state.

He said the committee was mandated to develop a framework for the domestication and implementation of community policing model that would align, complement and strengthen the homegrown security outfit, “Operation Rainbow” and other community security outfits in the state.

He said its duties were also to determine the organisational structure of community policing in the state, “in terms of its composition and roles at the state, local government, district and community levels.

“Outline and suggest funding modalities to ensure the sustainability of the framework.

“To develop a clear and coherent framework and guidelines for the operation of community policing in Plateau.

“To come up with any other recommendations that will ensure the effective implementation of community policing as a credible alternative to the conventional security approaches to the problem of insecurity in Plateau state,” the governor said.

He urged the committee to be diligent, objective and focused on the interest of the state and the well being of the people.

He said the state would provide the committee with all that it would require to perform its assignment effectively, saying it would strengthen the security architecture of Plateau to protect lives and properties.

Lalong gave the committee one month to submit its report, saying many states were looking up to Plateau as a role model for the implementation of community policing.

News Agency of Nigeria (NAN) reports that the governor had organised a peace and security dialogue on Feb. 4, with the theme, ‘Domestication of Community Policing in Plateau: Exploring Indigenous Options’ to chart ways on adopting community policing in line with the state’s indigenous peculiarities.

The communique issued at the end of the dialogue recommended the establishment of a technical committee to harmonise presentations, evolve a more sustainable Community Policing framework and called for the strengthening of Operation Rainbow.

In his response, the Chairman of the Committee and Attorney General of the state, Chrisanthus Ahmadu, assured the governor of the commitment to deliver on the committee’s mandate.

NAN reports that the governors of the North-Central states, in their recent meeting with the Inspector-General of Police(IGP) agreed on adopting Community Policing to address security challenges in their various domains.

NAN reports that chairman of the State Traditional Council, the Gbong Gwom Jos, Jacob Gyang Buba, the Commissioner of Police, the Christian Association of Nigeria (CAN), Jama’atul Nasrul Islam (JNI), and the Plateau Youth Council are among key members of the committee.