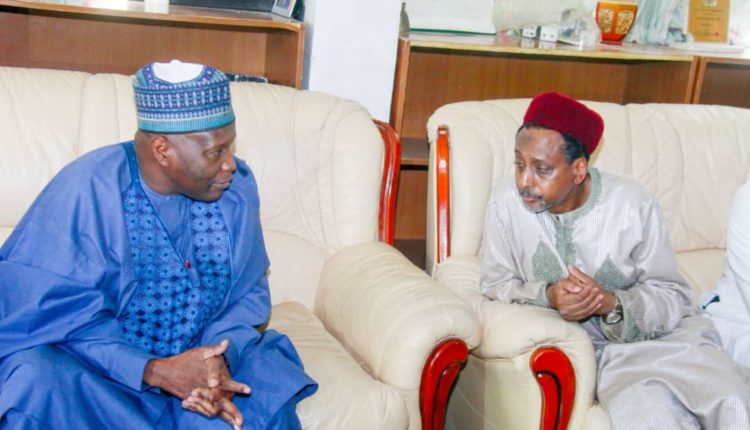 Share
Gombe State Governor, Muhammadu Inuwa Yahaya was in Yola on Saturday, where he paid condolence visit to the family of the late elder statesman and former federal permanent secretary, Alhaji Ahmed Joda who died Thursday in Yola at the age of 91.
Governor Yahaya,  in company of the Group Managing Director of the Nigerian National Petroleum Corporation, NNPC, Engr Mele Kyari paid tribute to the late nonagenarian whom he described as a patriot who served Nigeria meritoriously in different positions and left behind indelible marks.
He described the death of the Alhaji Joda as a great national loss coming at a time the country is in dire need of his wise guidance and counsel.
Governor Yahaya conveyed  his deepest condolences to the bereaved family as well as  the government and people of Adamawa State over the huge loss,  praying Almighty Allah to grant the deceased Aljannat Firdaus.
Also, the Governor commiserated with the Vice President of the Nigeria Union of Journalists (NUJ), Zone ‘E’, Comrade Alhassan Yahaya over the demise of his father,  Alhaji Yahaya Abdullahi, popularly known as Yaya Guza who died on Saturday in Gombe after a protracted illness.
Governor Yahaya, in a condolence message, described the deceased as a disciplined and forthright father as well as family pillar who lived an exemplary life and remained a source of inspiration for his children until his death.
He said Alhaji Yaya’s death is a great loss, not only to his immediate family but to the state as well, consoling Comrade Alhassan Yahaya and other members of the family of the deceased to take solace in the fact that their late father lived a life of service to Almighty Allah and community.
Governor Yahaya prayed Almighty Allah to forgive the deceased’s shortcomings and reward his good deeds with Aljannat Firdausy as contained in a statement by Ismaila Uba Misilli
Director-General, ( Press Affairs)
Government House, Gombe.

We are ready for Anambra election — NYSC