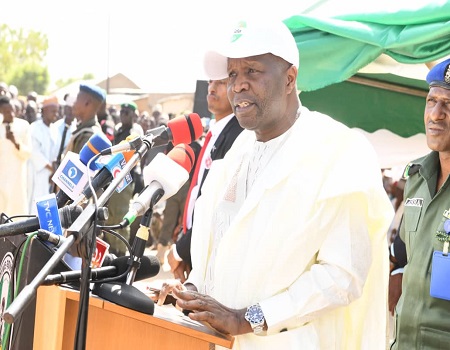 In line with his administration’s agenda of expanding economic frontiers for the state, Gombe State governor, Muhammadu Inuwa Yahaya has declared support for the national financial inclusion strategy as outlined by the Central Bank of Nigeria (CBN).

The Governor stated this at the flag-off of the CBN’s account opening week, held at the palace of the Emir of Nafada, in Nafada local government area of the state saying the initiative is in line with his administration’s agenda to expand the economic frontiers of the state.

Inuwa Yahaya who expressed worry over the dearth of financial institutions in some communities, particularly Nafada, Shongom and Balanga local government areas of the state, vowed to provide enabling environment and adopt measures that will encourage and accelerate more adult financial Inclusion.

He noted that individuals who own bank accounts stand to benefit more from programmes such as the Federal Government’s anchor borrower’s scheme as well as other empowerment and life-changing interventions.

The Governor further said that his administration will do everything necessary to ensure that financial institutions reach every local government headquarters, particularly the ones that are without any.

The Governor who said that one of the ways to assist the masses attain economic independence is to provide them with adequate access to financial services in a convenient and affordable manner directed all local Government Council Secretaries to support the process and mobilize people within their areas to ensure effective inclusion.

In his remarks, Chairman of the Financial Inclusion State Steering Committee (FISSCO) and Secretary to the State Government, Professor Ibrahim Abubakar Njodi said that strategies are in place to boost the achievement of the financial inclusion target in Gombe State.

He decried that the high level of financial exclusion being experienced in the state is depriving the citizens of a lot of benefits, saying owning a bank account is a prelude to financial independence and poverty eradication.

The SSG commended Governor Inuwa Yahaya’s disposition towards ensuring that the people of the state benefit maximally from government interventions, policies and programmes.

Emir of Nafada, Alhaji Dadun Hamza expressed gratitude to the state governor for choosing his Emirate for the launch of the programme and the Central Bank for coming up with the initiative, aimed at encouraging Nigerians to get financially included.

He assured of his subject’s willingness and readiness to take advantage of the account opening week and key into the initiative.

While giving an overview of the programme earlier, Branch Controller of the Central Bank of Nigeria in Gombe said the National Financial Inclusion Strategy account opening week was initiated by the apex bank, the Bankers Committee and other stakeholders to reduce the percentage of adult Nigerians excluded from financial services.

Gombe, which is considered among the least states in terms of financial Inclusion, is the only state selected from the Northeast and the CBN said it plans to jerk account opening in the state from well above thirty-eight to two hundred and fifty-eight thousand by the year 2020.

The account opening week is taking place nationwide, with one state from each of the six geo-political zones, including Kano, Nasarawa, Gombe, Ebonyi, Bayelsa and Ondo participating as contained in a statement by Ismaila Uba Misilli, Senior Special Assistant, Media and Publicity to the Governor of Gombe State.