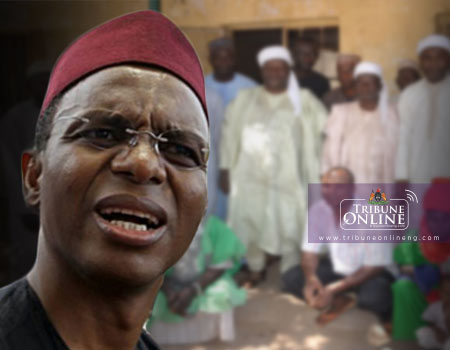 GOVERNOR Nasiru El-Rufa’i of Kaduna State has described insecurity in the northern region as a major challenge that requires the involvement of the region’s leaders for a solution.

He said this on Tuesday while receiving an entourage of the Zamfara Council of Chiefs on a courtesy call in his office.

The delegation was led by its Chairman, the Emir of Anka, Alhaji Attahiru Ahmad.

El-Rufai described the prevailing insecurity in the region as a menace that required a combined effort to solve with an active involvement of traditional rulers.

The Kaduna governor also called on journalists to continue to be objective and ethical in their reportage of events in the region, as well as shun reports that fan the embers of hate in the country.

Ahmad who led the delegation had in an address lamented over incessant cases of kidnappings, cattle rustling, banditry among others in Zamfara and the entire northern region.

He said there was a need to re-strategise security agencies’ efforts toward fighting the menace.

The Emir appealed to the governor to fully involve royal fathers in the security council of the state to curtail the menace.

He said their convergence on Kaduna was for a conference aimed at finding a lasting solution to the security threat bedevilling the entire region and pleaded for support from northern governors.

JAMB to collaborate with EFCC to fight corruption

Reordering the sequence of elections

Kaduna attack: We will not negotiate with bandits ― El-rufai