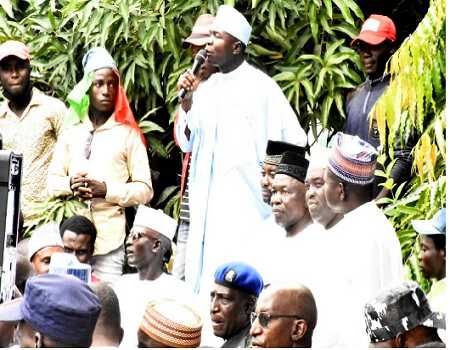 Bauchi State Government has pledged to assist members of the State Joint Committee on Motorcycle and Tricycle Operators in ensuring that the ongoing operation show your driver’s licence did not have a negative impact on their social service.

The pledge was made by the State Governor, Senator Bala Abdulkadir Mohammed while receiving members of the committee who visited him at the Government House, Bauchi on Wednesday.

The Governor who was represented by the State PDP Chairman, Alhaji Hamza Koshe Akuyam, said that government would also support them to ensure security in their operation.

Bala Mohammed expressed satisfaction with the contributions of the members of the committee to the economic development of the state in addition to their support towards the victory of the PDP in the last gubernatorial election.

Earlier, the leader of the delegation, Malam Bala Dauda requested the state government to assist members of the committee in the ongoing operation show your driven licence introduced by the federal government.

Bala Dauda who said the visit was to congratulate the governor on his victory at the tribunal, assured him of their support and loyalty for the success of the administrations.