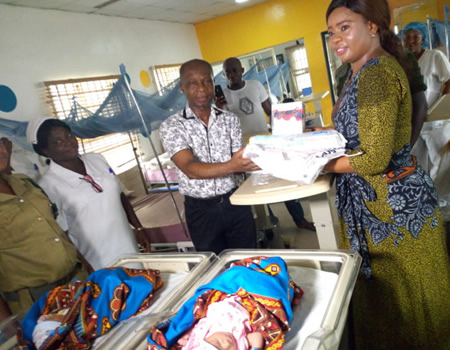 Gov Ben Ayade of Cross River has donated N1 million and other gift items to the management of the General Hospital Calabar for the upkeep of the prison inmate who gave birth to twins at the hospital on Thursday, April 18.

Ayade, who was represented by the Commissioner for Health, Dr Inyang Asibong, said on Saturday in Calabar that the gesture was a special Easter gift to the mother of the twins; a boy and girl.

Ayade noted that in the spirit of the Easter season, `the beautiful babies deserve love and care’.

Ayade said that in line with his welfare policy and love for children, the twins were named after him and his wife, Ben and Linda Ayade.

“Right now, the mother of the twins is not with us because we had to refer her to a higher facility for further medical attention. But she had a successful Caesarean Section.

“We have these two beautiful babies here with us. We will be following them up regularly and today we are here to present a special gift for their upkeep.

“We are donating a cash amount of N1 million and these items to the hospital to help in the management of these children until the mother is well, safe and sound.

“Further, we are going to have discussions with the prison authority to know the next step in what to do.

“But as we speak, the state government is handling the care of the children because we care and we are in the season of Easter.

“The governor has executive powers, we are going to work with our social welfare unit to try and see the extent of the crime and know if the mother can be pardoned because of these two beautiful children,’’ he said.

Responding, the Medical Superintendent of the hospital, Dr Etim Ayi, commended the state government for its magnanimity, love and care for the inmate.

Ayi said that the babies were delivered in the facility through a Caesarean Section before the mother was referred to a higher facility due to some complications.

“The mother of the twins is an inmate. She was brought here in labour with some complications.

“But we had to deliver her here with the help of some physician before referring her to a higher facility for further medication.

“As we speak, the mother is recovering quite well and the babies are also fine. We just received the Easter gifts and cash donation for the upkeep of the children,’’ he said.