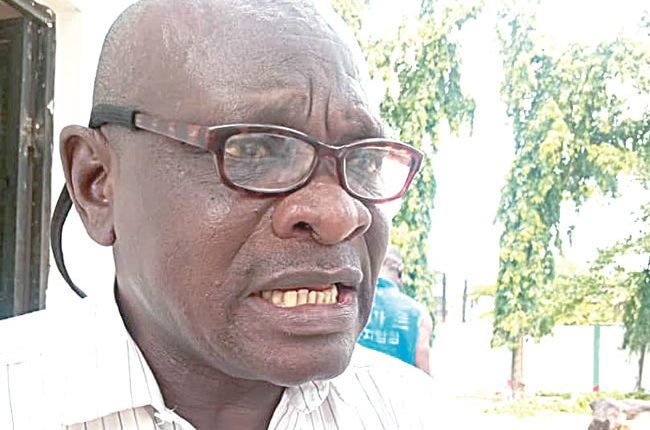 Vice chairman of the All Progressives Congress (APC) in Kwara State and an ally of the Minister of Information and Culture, Alhaji Lai Mohammed, Chief Theophilus Sunday Oyebiyi, speaks to BIOLA AZEEZ on raging intra-party crisis rocking the state chapter of the party.

Governor Abdulrahman Abdulrazaq accused some APC party leaders of neglecting him in the electioneering campaign that brought him to office. How do you see the allegation?

After Abdulrazaq emerged as the APC candidate in 2018, the chairman of the party, Honourable Bashir Bolarinwa, called a meeting and appealed to all those who contested with him as well as other members of the party that we should all work together for the success of our party at the poll. Thereafter, the chairman called another meeting of all the aspirants that contested at our Zango area former APC office. The candidate now the governor also attended. It was then we discussed the issue of campaign structure.

The governor that day came with Dr Yahaya Oloriegbe, who was the APC Kwara Central Senatorial candidate. Abdulrazaq said then that he would want a bottom-heavy campaign structure that will bring all groups together.

There and then, we set up a committee which included Alhaji Isowo Mustapha, the secretary of APC, Abdullateef Alakawa, Kwara Central senatorial chair, Honourable Olabanji (Kwara South) and Chief Sunday Oyebiyi from Kwara North. I was made the committee chairman. The candidate himself nominated Kale Belgore to be a member of that committee. We met about six times and we came out with a report and submitted to the governorship candidate through the same Kale Belgore. The job of the committee was to fashion a campaign structure that would handle the election. This we did creditably. After submission, we waited a while and nothing from him. It was then the chairman called some elders to tell them that our campaign ought to have started.

After that period, the then governorship candidate turned his back against us and we never saw him again. The chairman would call sometimes the candidate would not pick his calls. But the chairman kept calling. But for the governor to say that he never knew about the campaign structure which he contributed to by the nomination of Kale Belgore is very funny.

The governor also said that the party leaders did not support his campaign…?

That is not true. This is a man who wanted to flag off his campaign at Kosubosu, Baruten Local Government Area of the state and refused to inform the party and stakeholders. Nobody knew. The day to the flag off of the campaign, the chairman went to him to ask about the rumoured flag off of the campaign and affirmed that. Then chairman asked if he had informed all the stakeholders and the Minister of Information and Culture Lai Mohammed, the candidate said he did not inform any of them. So, one way or the other the flag off did not take place that very day. But the following day, he went and told the chairman that he would go to Baruten to greet the traditional rulers.

As the chairman was seeing him off, the candidate pointedly told the chairman that the party should handle its own campaign, while he would handle his. He said the party should source for money to do its campaign. The chairman called Alhaji Lai Mohammed that there was problem at hand and that the party could not afford to fail. Then it dawned on the minister to move round and source for money. By his recent comments, Governor Abdulrazaq has confirmed that he never funded the campaign that made to him win the election. It is very absurd for him to come out now and say that people never supported him. Which campaign did he do?

That is very funny too. If governors and ministers donated money for some individuals for the 2019 governorship campaign in the state, I challenge him to mention the names of those who collected the money. The governor should be factual enough to come out clearly what he means by all this.  We cannot be chasing shadows. This is an area he had to expatiate. That is a vague statement in every form.

Who’s the author of ‘O to gee?

In 1983, one of the APC stalwarts in the state, Alhaji LAK Jimoh propounded the slogan then when he was a governorship candidate. In 2011, the man also came out with the same slogan. For anybody to lay claim to the issue of ‘o to gee’ is an attempt to change the trend of history which is not possible. I don’t see the governor as the author or originator of the slogan.

Don’t you think the raging crisis in Kwara APC may further polarise the party?

The party is polarised because some people grouped themselves to be Abdulrahman Abdulrazaq (AA) while those of us who stay with the party still belong to the APC. The polarity can be seen clearly along the lines of those following individual and those following the party.

We learnt of formation of a Third Force out of the APC in the state. What’s your take?

Staying in a political party is a matter of interest. They told the whole world what prompted them to take those steps. That is their thinking. No one can take that away from them. But what I know is that what they said is true, but those of us who still remain in the party believe that we can bring a positive change to what is happening. There is no need running away from anybody. We will remain in the same party and make sure that the right thing is done.

What are the contentious issues in this dispute?

With regret, it has become an open secret that our governing party in the state is critically ill, lying in the theatre for surgery. Regrettably still, the Chief Medical Director is contemplating “mercy killing” by withholding extreme medical measures, rather than providing life support for the patient.

In the past few weeks, there have been waterlogged stories in the media about the cause and effect of the unfortunate infighting in our party. There have been different narratives from different perspectives and affinity.

It is far from the truth that the APC leadership abandoned its gubernatorial candidate at the injury time, as claimed by Governor AbdulRasaq. It is also important to affirm that there is not a scintilla of truth in the stories of contest for the leadership of APC between Governor Abdulazaq and the Minister of Information and Culture, Alhaji Lai Mohammed, during and after the elections. The position of the party that the governor is the leader is never in dispute and it is so recognised by the rank and file of our party in this state.

You are not unaware that Governor Abdulrazaq’s group made a total mess of the membership registration/revalidation exercise in this state. Is it not an antithesis to the catalogue of moralities of O to gee philosophy that the product of the struggle was unable to conduct free, fair and transparent demography of our political family (APC)?

While many prospective members were short out, the existing family members were deliberately blacked out of the exercise. This necessitated formal complaints lodged by the members of the party to the national leadership of the party.

Much as we appreciate the positive disposition of the national headquarters to our plights in Kwara State, we hereby appeal to their conscience that justice must not only be done but must be seen to have been done. Otherwise, the corporate existence of our party might be in jeopardy.

Justice demands that complainant in a dispute should not be deprived the fruits of his/her complaints. We ought to take custody of the fresh materials. We hereby state categorically that we are fully prepared to go for direct congresses immediately after registration/revalidation exercise. We are not, and shall not be part of the unilateral consensus arrangement being proposed by the governor’s group. The beauty of democracy is in allowing minority to have their say, even when majority have their way. The only civilized way to prove our numerical values is through congresses, not by any proxy.

Midnight Crew to celebrate 20th anniversary with US tour

Aramide is back with “Bitter-sweet”