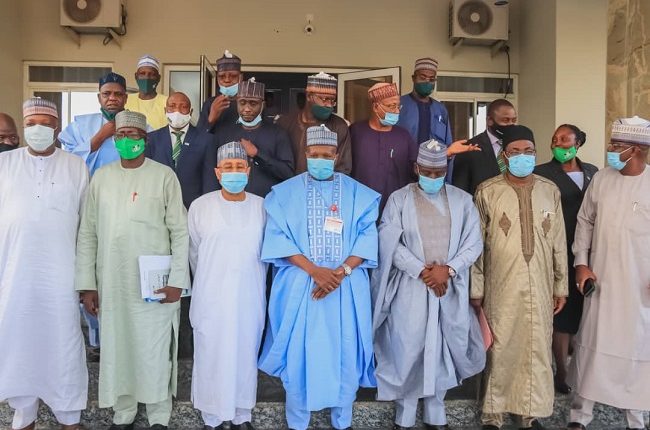 Gombe State Government has declared that it is open to discussions and partnership with the Bank of Agriculture, (BOA) on the introduction of modern farming techniques in the state and creating an agricultural value chain for farming communities at the grassroots.

The declaration was made by the state governor, Muhammadu Inuwa Yahaya when he received a delegation from the Bank of Agriculture, led by its Managing Director and Chief Executive Officer, Alwan Ali Hassan at the Government House in Gombe on Friday.

He described the history of the BOA as a robust one base on its trajectory of encouraging agricultural productivity as well as improving the lives of the people through the provision of incentives and inputs.

The governor informed the visiting BOA team that about eighty per cent of the people of the state are peasant farmers which makes it imperative for them to always require access to loan facility to improve productivity and livelihood.. and for modern farming techniques.

Inuwa Yahaya also said that he had, on several occasions, met with the Minister of Agriculture, Sabo Nanono and other key stakeholders as part of his administration’s commitment to foster symbiotic relationship and revamp the agricultural sector.

The governor urged the BOA to improve on its services, especially on sensitisation aspect as the majority of farmers in the state and the country at large are not well guided and supported, hence the over-dependence on agricultural products from other climes.

He further said that leadership at all levels must be seen to guide, inspire and take the people to an enviable level of human capital development.

The governor described the products of the Bank as well packaged and articulated, particularly the newly introduced ones, but however observed that farmers at the grassroots must be carried along in the services of the Bank.

He also said that with the geometric progression of the population of the state alongside poor agricultural practices, it behoves on stakeholders in the sector to smoothen rough edges and tighten loose ends for the benefit of the farmers.

Inuwa Yahaya said that “Gombe State has the land for food production and animal husbandry, as a matter of fact, we have the largest grazing reserve in Africa measuring about one hundred and forty-four thousand hectares”.

The governor regretted that ever since the reserve was established, nothing tangible was done to put the place into productive use. He expressed happiness with the recent commitment of the federal government to activate it through the National Livestock Transformation Programme.

While making references to the Dadinkowa and Balanga Dams, the governor regretted the underutilisation of both natural endowments which he noted has the potentials of producing power and revolutionising dry season farming in the state and beyond.

Inuwa Yahaya disclosed that his administration is looking at how to revive cooperative societies in the state and restore them to the good old days when they were considered indispensable to the growth and development of sectors such as agriculture.

Earlier, the Managing Director and Chief Executive Officer of the Bank of Agriculture, Alwan Ali Hassan said the delegation from the Bank was in the state to discuss business in Agriculture and its value chain and how the teeming farmers can have easy access to some of the facilities and products available in the bank.

He said the bank will transmit all its products through its four branches in Gombe, Billiri,  Bajoga and Kumo so that farmers in the state need not travel to access the services they so desire.

The Managing Director commended the cordial relationship existing between the Bank and the Gombe State Government, saying the ties were further strengthened when the state paid in full the 209 million naira loan facility it earlier accessed.

He particular applauded Governor Inuwa Yahaya for prioritising Agriculture in his drive to take Gombe to greater heights as contained in a statement by Ismaila Uba Misilli, Senior Special Assistant Media and Publicity to the governor.

Obaseki calls for immediate probe of attackers of #EndSARS protesters