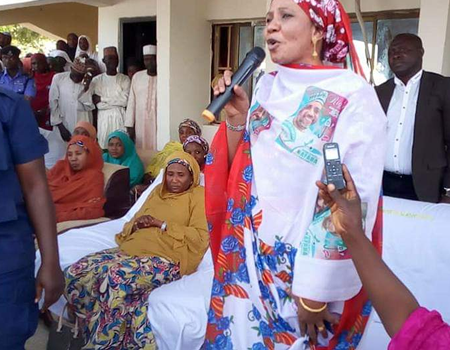 AHEAD of the February 16 and March 2, general elections, Wife of the gubernatorial candidate of the Peoples Democratic Party (PDP) in Gombe State, Hajiya Maryam Bayero Nafada on Thursday kicked off camping tour to the 11 local government areas in the state to solicit support for the PDP.

Hajiya Maryam, who received hundreds of decampees from the ruling All Progressives Congress (APC) while in Dukku LGA, called on women and youths to vote massively for the party in the forthcoming general elections.

She also advised them to remember the achievements of Governor Ibrahim Hassan Dankwambo in the state, adding that there was a lot to be grateful to the PDP by ensuring the party return to power at all levels.

“I am here to remind you of the good work done by the PDP, and to solicit your support for PDP candidates at all levels” and urged women to vote massively for the PDP to enable it to tend to the sufferings and hunger in their homes.

Our correspondent reports that the defectors were led by their leader, Hajiya Faiza Yusuf alias Karamarsu Babbarsu, the campaign train later moved to Nafada, Funakaye, and Kwami Local Government Areas.

Customs facilitates clearance of over 1,000 containers at Apapa Port ― Controller