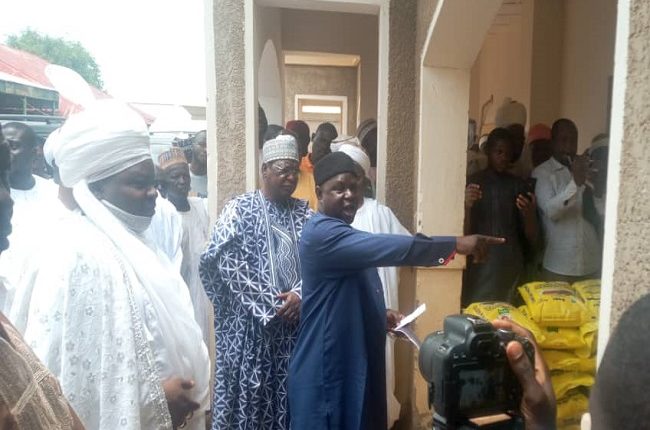 The communal clash between Lunguda speaking people of Guyuk and Waja settlers of Lafia in Lamurde Local Government Area of Adamawa state in July which led to the loss of lives and destruction of houses which rendered many homeless and displaced in Gombe state has been described as needless and uncalled for.

The assertion was made by the Bala Waja, Alh. Mohammed Danjuma, who is the Paramount ruler of Waja people in Balanga LGA of Gombe state who also condemned the communal clashes which occurred the two indigenous people of the same area.

The traditional ruler stated this in his palace at Tallase headquarters of the LGA when he received Lunguda/Waja forum from Abuja who brought relief materials to the affected victims and Internally Displaced Persons from Adamawa state who are taking refuge in Gombe state.

Mohammed Danjuma said that the crises started in Adamawa and ended up in Gombe state describing the incident as most unfortunate saying that Lunguda and Waja people were neighbours under one chiefdom in Gombe enjoying harmonious relationships and intermarrying.

He, however, reaffirmed that his chiefdom will not allow any group to incite hatred and violence against one another stressing that all that is required is for the people to see each other as one, live together and tolerate each other.

While speaking earlier, team leader of the group, Professor Iliya Dongs said that in Abuja, Waja and Lunguda people are united and therefore see no reason why those in Gombe and Adamawa states will engage themselves in needless clashes which have led to the loss of innocent lives and destruction of valuable resources.

He further appealed to traditional leaders in the areas to collaborate with relevant authorities and fish out the perpetrators of the violence in order that the people will once again live in peace with each other.

Iliya Dongs then presented the relief materials to the Bala Waja for onward distribution to the victims in Gombe state and those displaced persons from Adamawa State.

Also speaking at the occasion, two former Deputy Governors of Gombe state who were also members of the group, Messers John Lazarus Yoriyo and Tha’anda Rubainu described the incidence as very unfortunate and uncalled for.

The two who spoke differently, however, expressed their appreciation to the Adamawa state government for taken measures to set a panel of inquiry saddled with the responsibility of finding the immediate and root causes of the crisis as well as a solution for a lasting peace among the two warring brothers.

The Items donated included 10 bags of rice, Four bags of beans, 20 bags of semovita, two bags of sugar, 8 roles of bathing soap,10 cartons of detergent,10 cartoons of seasoning, 10 cartoons of petroleum jelly, 10 of Vegetable oil and 10 bags of salt.

EDITORIAL: FG’s Gaffe On Amotekun
FOR the umpteenth time, the presidency stirred the hornet’s nest recently. Against the run of logic and the law, it declared that regional security outfits such as Amotekun would be subsumed under the existing policy architecture.  Senior Special Assistant to the President on Media and Publicity, Garba Shehu, featuring…Gombe monarch describes Waja

E Ink Tablets Are Fast Replacing Pen And Paper.
E Ink tablets are devices that allow you to do the things you can do with a pen and notepad, which is to take notes for keeps with the possibility of reviewing later. The simplicity of these devices is so amazing that using them is just like using pen and paper. Technological advancements have made lots of people turn to…Gombe monarch describes Waja Gombe monarch describes Waja

22 Christians And Muslims Leaders Unite For Peace In Kaduna
Muslim and Christian leaders in Kaduna State have called on adherents of both religions to stop conducts that are unbecoming of their faith but to embrace peace instead. The leaders of faith spoke at Sir Kashim Ibrahim House, Kaduna when Governor Nasir El-Rufai inaugurated the House of Kaduna Family, a platform…Gombe monarch describes Waja  Gombe monarch describes Waja